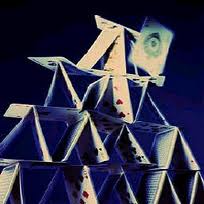 Since 2008 John and his National Party playmates have been carefully stacking cards to build a "brighter future" for all New Zealanders. Each card provides the structural support for another and they have been busy stacking them higher and higher while telling anyone who will listen how skilled they are at doing this. John bragged that they could make a tower as tall as Australia's.

John and Bill began the base of the structure with the "lowering the tax for the rich" card and Nick placed the "weakening of the ETS" cards on top. Gerry was a bit careless with his "drilling, mining and fracking our future" cards and caused a bit of a shake as thousands marched up Queen Street to protest their placement, and then Christchurch shook (but I don't think he was responsible for that). Gerry slightly adjusted the wobbling mining cards and then was given the responsibility of placing and supporting the "Christchurch recovery" card.

Anne was trusted with placing the education cards of "National Standards" and "early childhood education cuts". She was very aggressive in her card positioning and her cards began to wobble. She was later replaced with Hekia who didn't think to readjust Anne's cards before placing her "larger class size" card on top and it immediately fell off. She had to quickly replace it with a "League Tables" card which looked a little precarious.

Steven had a number of "motorway" cards that he enthusiastically placed on top of the growing structure and although some people on the sideline questioned his positioning, he stacked them anyway. He also had some "rugby" cards and when one fell off he quickly blamed Len Brown before placing it back again.

Kate caused some concerns by removing some cards from the base, but explained that a bit of tunneling underneath and some extraction of cards wouldn't do any damage to the structure and we could add them to the top.

Paula had a heap of "welfare" cards that required her high heels and a bit of a stretch to place. Her positioning was a bit random and haphazard and it was suggested that they weren't her cards to play with in the first place. She had apparently snatched them from some beneficiaries who were trying to build their their own houses and wanted them back.

Nick had been adding the "ACC" cards and although he had claimed he didn't have many of them, it turned out he had lots up his sleeve and had been cheating. Judith was given the responsibility of removing some of them and trying to steady what remained.

It transpired that John Banks had supplied and paid for one of the base cards, but it was rather thin and had little strength so the police were called in to prop it up.

John promised the Maori Party that they could place a few cards too, but only gave them one. Unluckily it was as thin as John Banks' card and a little soft (someone had dropped it in a puddle outside a Treaty hearing) and it was secretly placed near the base.

Although they were running short of cards they had a plan to sell a few of the asset cards at the bottom so that they could purchase more, the Mums and Dads were keen to buy them.

John is very proud of the tower that he and his mates are building, he got the plans for the structure from his old friends at Merrill Lynch, who are renowned for their card houses. In parliamentary sessions he sits gloating from top of his tower (on a seat he constructed from cards he was given after a Sky City visit) and shouts:

"I'm the Prime Minister, they call me John Key! For I am the Ruler of all that I see !"

At the base of the tower a small burp was heard...