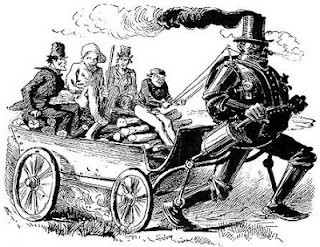 The National led Government is a conservative government and as such they prefer the reassurance of long held ideologies and views. They call themselves "centre right" and while they reject the hardline Neo Liberal views of the Roger Douglas brigade, this is more to do with political pragmatism than a rejection of the philosophy. I'm sure if voters were amenable, they would embrace a flat tax and the privatisation of everything.

Risk taking for National is using contemporary research and academic thinking to inform policy. How can you trust anything that hasn't been around for fifty years or more? Scientific confirmation that greenhouse gases were contributing to climate change was widely accepted by much of the scientific community in the fifties and sixties and although few National MPs will question it now, there is still a lack of urgency in acting on this knowledge.

The Emissions Trading Scheme was never fully supported by the Green Party when Labour first introduced it as it had serious flaws and omissions but was better than nothing. A direct tax on emissions would be far more effective in changing behaviour and limiting the release of carbon, while a trading scheme allows wealthy emitters to continue emitting through clever paperwork and greenwash. The fact that National have also protected our worst emitters through delaying bringing them into the the scheme has meant our emissions have steadily increased since 1990 (the base line for the Kyoto Agreement) and cost tax payers $1.5 billion last year alone. We are effectively subsidising the industries who have been given an unnecessary reprieve and because of this they have made little effort to change practices.

National keep stating that there is no point in addressing our emissions if our trading partners and competitors aren't doing the same, they claim it would be economic suicide. Yet it is our 100% Pure, clean green brand that supports our exports and we are now one of the worst in the OECD for carbon emissions per capita. The National led Government also seems hell bent on increasing our emissions by supporting farm intensification, and encouraging lignite mining in Southland and new coal mines elsewhere (Solid Energy's plans for using our lignite will see a 20% increase in carbon emissions). Building new motorways and not substantially investing in public transport has seen our transport emissions remain high and make us eighth in the world for car ownership per capita.

When there has been so little investment in alternative energies, improving farming practice and creating more efficient transport systems, the next government (if it isn't a National led one) will have to look at dramatic change rather than using a more incremental process had we started the journey earlier.

National's determination to hold strong with the energy source that fueled the industrial revolution must surely make them the ultimate steam punks. After all it was Gerry Brownlee who coined the phrase "sexy coal". 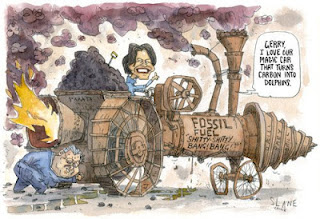