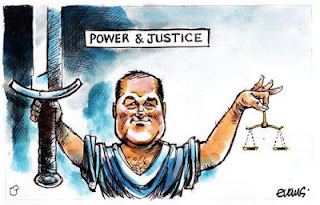 This National led Government thinks in fiscal rather than moral or ethical terms. When John Key was questioned regarding the ethical nature of John Banks' nondisclosure of donation sources he claimed that as long as Banks hadn't broken the law (and he admitted the law was vague), he was comfortable. When it comes to money, it seems, as long as it is vaguely legal anything goes and the human consequences are not a major consideration. National operates a little like the tobacco industry as exemplified by one of their managers when Hone Harawira asked in a select committee if he thought that their business was a moral one, "It's legal" was the reply.

When ACC staff were provided with financial incentives to remove people from long term support then it totally changed the context in which the service was being provided. It has since been revealed that not only have thousands lost the support that they genuinely needed and deserved but hand picked medical assessors were used to provide assessments favouring ACC (sometimes multiple assessments were required until the "right" response was achieved).

A similar approach is now being used for legal aid. Under the new legal aid fixed fee system it is now 531% more lucrative for lawyers if their client pleads guilty at the earliest opportunity. Obviously an early guilty plea would save substantial court costs, but with such a large incentive I can imagine many clients will end up with criminal records when they were actually innocent. I can understand the frustration that must occur when someone who is actually guilty wastes considerable time and energy by not admitting so, but when the system is heavily stacked towards gaining an early admission of guilt then proper legal advice and representation will be compromised.

We are seeing the continual erosion of the rights and dignity of the most vulnerable in our society and when we are experiencing growing inequities of income we are also seeing growing inequities in the provision of services and support. In the case of ACC the unethical culture had existed for some time before the reality was confirmed and I dread to think how pervasive this approach may be throughout all our government services. Jim Bolger once campaigned on National creating a "decent society" and I can't imagine John Key even contemplating using a similar slogan.

We now have a society where being poor and a beneficiary implies that you are probably: a drug abuser, lazy, a benefit fraudster, a poor parent, sexually irresponsible and promiscuous and a criminal. When the most vulnerable in society are demonized it is then easy to justify cutting support and have incentives to achieve this and you only need a few examples to taint the reputations of the rest. "Decent" people are pakeha and wealthy and as such deserve tax cuts and shares in our energy companies and if poor people live in an affluent area they should be shifted away to live with others of their kind. Our decent society is becoming an increasingly segregated society.