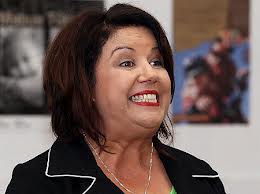 25% of New Zealand children are living in poverty, 50% of children will suffer poverty at some time in their childhood, we have some of the worst statistics for child health and welfare in the OECD, we have one of the highest rates of youth suicide in the OECD. Poor families are being forced to live in crowded conditions because of a housing shortage and jobs are continuing to be lost because of our high dollar and a struggling domestic economy.

The PM told Metiria Turei that she was barking mad to suggest a universal child payment (even though the elderly get one). Calls for meals in schools have been rejected, the fruit in schools scheme has had funding cuts and a youth wage has been introduced that is substantially less than the current minimum wage.

The White Paper on Vulnerable Children has been released and Paula Bennett has had an epiphany...what we need to do for children, above all else, is to introduce a dob in a child abuser scheme!

"I feel like this is what I came into Parliament for," said Ms Bennett.

bsprout said…
$36 million goes to supporting the America's Cup challenge, $20 million goes to help the 30,000 children who have been identified as at risk by Paula Bennett. That works out as $666.66 per highly vulnerable child.