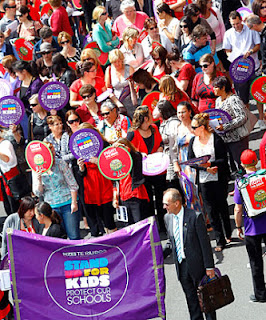 While the last four years have been difficult for most teachers under this National led Government it has been considerably worse for Christchurch. We all had to manage the implementation of the untested National Standards under the threats of sacking boards and principals if there was non compliance. We have all been concerned by the refusals from Ministers Tolley and Parata to properly consult with the profession or collaborate over educational change. We have all suffered from having a Secretary of Education leading the Ministry who obviously has no understanding of the New Zealand system. We all survived the proposed mass sacking of teachers to support the Government's idea that larger classes produce better outcomes for children. We have struggled with understanding why we should introduce systems like Charter Schools into New Zealand and we have all suffered from the poorly managed introduction of the Novapay system that resulted in over 8,000 errors and has wasted untold hours of staff time.

Christchurch teachers have suffered all of those things on top of also having to manage the enormous disruption of major earthquakes and stressed communities. For this Government to use the situation in Christchurch to push through a neo-liberable business model of education reform is callous in the extreme. The initial plan recommended 39 closures and mergers and obviously rejected the viability of any school with less than 150 pupils while favoring mega schools of around 600 pupils. The data used to support the plan was highly inaccurate and consultation was minimal. It was obvious that the plan was driven by fiscal considerations only and using data that was shaped to support the agenda. Community and educational considerations did not really feature.

Due to a huge public outcry and the fact that Minister Parata could not convincingly explain how any form of consultation had occurred, schools were given an opportunity to make submissions in the last two months of the year. To the Minister this may have seemed reasonable (although possibly a deliberate tactic), but for teachers and schools it meant an added workload at the busiest time of the school year while also dealing with the nonsense caused by Novapay.

A Christchurch Principal was interviewed on Nine to Noon regarding the very detailed and well consulted submission that his school had managed to produce over the past two months. His school had done what the Ministry should have, it had consulted well with the community and presented a fully costed plan for a school rebuild (that actually came to half the price of the Ministry's estimate). This Principal had acted very professionally, as his school had been identified for closure he had prepared staff and parents for that possibility. He had supported many of his staff into new jobs and enrollments for the following year had halved. While he hoped that the submission would be enough to save the school the Principal was realistic and had ensured that in the event of a possible closure it would effect as few people as possible. However his efforts had obviously come at a cost because when asked what he himself would do if the school did close he said he would look for a quiet job like working in a cafe. Although he was probably joking I know that the schooling changes that occurred in Invercargill saw a number of stressed principals leave the profession and losing good educational leaders unnecessarily because of poor process isn't good for teaching.

Christchurch teachers and support staff met yesterday and their lack of faith in the Minister and little confidence in the process was overwhelmingly obvious. For only the third time in the 130 year history of the New Zealand Educational Institute there has been a decision to take strike action, and it will be an illegal one. Such is their belief that this Government will ignore all their submissions (as it has done with all the others over the last four years), the strike is timed for the day after the Minister's announcement of the final plan.

Despite attempts to make it seem as if any action is driven by teachers supporting their own interests the reality is that the profession is far more interested in saving our schools from bad change and protecting the interests of the children in our care. Larger classes aren't good for kids, putting untrained teachers in front of classes is irresponsible and a five year old having to attend a mega school of over 600 pupils is not a comfortable thought.

weka said…
Hi bsprout, your comments on Chris Trotter's post about the GP were very good. Any chance of revamping them for a guest post at the Standard? It would be good to have some more discussion over there about GP strategy and some of the issues being faced re coalition forming. Also the points about processes for managing the relationship seem very important to get people thinking and talking about.
December 7, 2012 at 9:45 PM

bsprout said…
Hi Weka, email me and we could have a conversation about this: vickbick.davek@xtra.co.nz
December 8, 2012 at 11:41 AM