Kate Wilkinson, the Minister of Consternation. 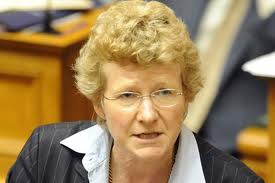 Conservation Minister, Kate Wilkinson, had a stern response to Lesley Soper's claim that DoCs decision to grant initial approval to the Fiordland tunnel and monorail was inappropriate. In Today's Southland Times her letter explained that the public hearings and acceptance of submissions had allowed proper process to be followed. Her letter concluded with:

"For Ms Soper to suggest this as being "inappropriate" is erroneous both in fact and law".

Sadly Kate Wilkinson is doing what many National Ministers do, reinterpreting the law and ensuring the "facts" are shaped to suit their agenda. Considering the amount of stress and anxiety she is causing amongst those of us who care about preserving our natural heritage within our conservation parks I felt obliged to write another letter:

Conservation Minister Kate Wilkinson attempted to reassure us all in her letter (21 August) regarding the good process and public consultation being followed for the proposed tunnel and monorail in Fiordland. For those of us who genuinely care about the environment and status of our National Parks we were not reassured and support Lesley Soper's view that DoCs process was inappropriate.

Sadly, however, the inappropriateness of DoC's decision to give initial approval to those two commercial projects only applies to the old DoC that existed before the National led Government changed the playing field. When DoC was originally set up in 1987 the intent was very clear: "To protect natural and historic heritage and provide recreational opportunities. Nature was to be protected for its own sake and protected for New Zealanders and future generations to enjoy." Under DoC's original model neither the tunnel nor the monorail would have been considered compatible with the Parks Management Plan and would have been rejected immediately. This would have saved much money and anguish and given certainty to both the private developers and those who support the conservation of the park.

Under a National led Government DoC's purpose has been changed to "conservation leadership for a prosperous New Zealand". It is also probably no coincidence that "working with tourism operators and others running businesses on public conservation areas" precedes "Advocating for the conservation of natural and historic heritage" in the list of DoC's new roles.

I do hope that the local petition that collected 25,000 signatures, the many hundreds of detailed submissions and the twin campaigns of "Save Fiordland" and "Stop the Tunnel" are successful, but DoC isn't what it once was and this Government has a clear agenda that doesn't appear to value the same things I do.

bsprout said…
Thanks former DoC staff member. I feel concerned that state servants are generally gagged from commenting on Government policy and especially so for DoC workers.

Teachers are still able to speak out if they disagree with policies that effect the welfare of the children under their care and I think those who work within DoC have a greater understanding of how policy can effect the the environment, but can't say anything.
August 22, 2012 at 4:29 PM