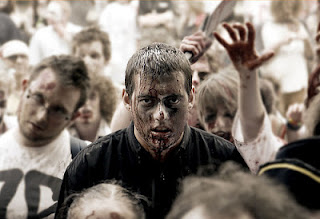 This National led Government likes to fast track change, they claim they need to act with urgency to save us from wasteful spending and to improve front line services. Within the last four years they have attacked numerous state departments and sectors, slashing budgets and demanding greater efficiencies. To them the process is simple: take away the money, set targets and tell people to work harder. The trouble is, change isn't that simple and simple thinking does not necessarily lead to positive outcomes.

A difficulty with ongoing change is that we are continually looking forward to prepare ourselves for the next wave to hit and have little time to look back to see the resulting debris. Well, I have looked back and it isn't a pretty sight. The earthquake damage to Christchurch City was bad enough but National has wrecked havoc across the entire country with social structures and government infrastructures crumbling and literally thousands of people emerging from the dust and rubble like dazed zombies. If it were a film it would be an R rated "splatter" movie (including heaps of cutting, hatcheting and blood letting, led by the "Smiling Assassin")

Education has suffered multiple hits, adult education was the first to go and community classes across the country were slashed. Then it was early childhood's turn as $400 million was wiped, the 100% qualified teacher target was cut to 80%, teachers lost jobs and fees rose. The Ministry of Education had its budget cut by $25 million to improve frontline services but resulted in deteriorating performance and frontline staff struggling to meet identified needs. Primary schools have had the majority of their curriculum advisors sacked and teaching effectively narrowed to literacy and numeracy through the fast tracked introduction of National Standards. The introduction of Charter Schools will see more savings as unregistered teachers can now be employed to teach and their pay and conditions can be determined outside of the normal collective agreement.

Both primary and secondary schools barely escaped an aborted attempt at cutting teachers' jobs and while Education Minister, Hekia Parata, failed in this attempt it is clear that the policy has been set aside for a later opportunity. Tertiary education has also been targeted with $60 million less available this year than in 2011. 4-5,000 students will also have their allowances cut and this will probably affect the number of postgraduate degrees that will be completed.

DoC has seen it's budget slashed by $54 million and the resulting losses of staff involved with pest  control will see many of our protected areas under greater threat and an increase in the loss of threatened species and biodiversity. Our 100% pure brand is largely dependent on our conservation estate and this will be put at risk if we can't protect them. The commercialization of DoC will potentially see our World Heritage park lose its status as one of the world's more pristine environments as it becomes more like a theme park.

ACC had budgets cut and staff provided with incentives to refuse cover for long term claimants. Sexual abuse counseling has been hugely affected and many deserving people have lost their financial support for reasons that cannot be properly justified. After the last four years the culture of ACC has deteriorated to a point of being highly dysfunctional and the recent breaches of privacy has been the last straw for many.

Housing New Zealand was already suffering from under investment with almost half of the homes on its books being the Michael Savage originals built 70 years ago. It has been also estimated that Auckland needs to build around 11,000 homes to meet the increasing demand. Not only has the government removed state houses from affluent areas to suit developers but they have cut local services and set up an under resourced call centre (again to purportedly "improve" services).

The IRD received similar treatment to Housing New Zealand with 156 jobs slashed from regional offices around the country and an inadequate call centre established instead.

305 jobs were to be cut from the Ministry of Foreign Affairs and Trade to save an annual $25 million from its budget. The process has been hugely messy, demoralizing frontline staff and costing millions in consultants fees.

As the Government keeps salaries low in state services and increases the workload through staffing cuts there are numerous examples of deteriorating service and low moral.

The most expensive of all the high priority and urgent government initiatives are the $12 billion Roads of National Significance (RONS). No cost benefit analysis was done at the beginning and those done since have revealed that many will not warrant the expenditure. Most of the motorways are to be built around Auckland and the provinces are suffering from cuts to their road maintenance budgets to support their construction.

The government's enthusiasm to cut budgets for border control staff and reduce regulations for overseas trade has seen a reduction on spending for biosecurity with some devastating consequences to our beekeeping, tamarillo, kiwifruit and potato industries.

The Government is behaving like a change juggernaut crashing through one change after another and their next victim looks as though it may be local government, where they are hoping to dissolve many councils to create cost cutting unitary authorities. They are also encouraging councils to sell off their assets to help with funding and stick to narrow areas of expenditure like rubbish collection and sewerage.

We have yet to see any benefit from the government's slash and burn approach, unemployment is up, borrowing has leapt to over $70 billion (an increase in over $40 billion since they took office), child and family poverty has increased dramatically, income inequity has increased faster than any other OECD country and we have one of the worst rates of child health and welfare. 35,000 new Zealanders left for Australia last year (our worst net migration loss for over 11 years) and we now have one of the highest youth suicide rates in the OECD. The tax cuts given to the rich has seen their increased wealth spent on extravagant mansions, expensive cars and property, rather than spending on job creation and developing our productive sectors.

New Zealand was once a prosperous, egalitarian society that led the world in education, environmental protection and child welfare. We were world leaders in the way we promoted social justice and had well functioning support services for those who needed it. National's ideological agenda and change processes are destroying almost everything that once defined us. I don't want to continue living in what feels like a crazy movie set!

Mooloomagic said…
Yes I feel I'm watching the same movie. Most New Zealanders seem oblivious though as Key reamins so popular.
August 20, 2012 at 8:05 AM

bsprout said…
Hence the Zombie bit I guess, Mooloomagic. How else would you explain why people are seemingly oblivious to the destruction and mayhem?
August 20, 2012 at 9:53 AM

bsprout said…
To be fair, Anonymous, Labour is saying stuff but just not very loudly, they don't want to frighten the horses (or their biggest funders). Also some of this also happened under their watch too.