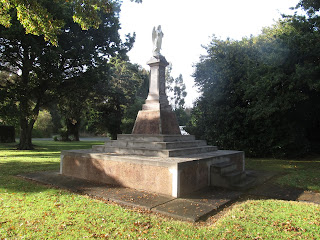 This Anzac Day I happened to be in Hampden while returning from a family tramp in the Abel Tasman. There didn't appear to be a dawn parade but I walked to the Hampden cenotaph anyway and contemplated the lists of lost soldiers from the Great Wars. There were almost twenty lost from this small seaside community in World War 1.

This was the place where my maternal grandfather retired from farming. He had been a sergeant in WW1 and was gassed. I have a photo of him convalescing in England. My grandfather is lying in a wheeled bed and is surrounded by wounded soldiers, some holding crutches. I have seen many monuments from communities the size of Hampden (or smaller) and realize that my grandfather was actually one of the lucky ones. 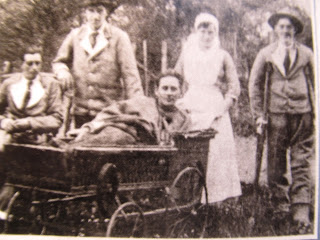 While war is terrible, and causes great grief for many families, there are some positive elements to having to endure great adversity. Women in both wars had to take on what were traditionally male roles and this helped bring about greater equality and generally raised male understandings of what women could do. Although there is still some way to go, and there continues to be inequality in how we regard jobs dominated by women, the wars did break down barriers that had constrained them in the past.

Wars also brought communities together for a single cause and to share grief. This has also occurred in Christchurch during the earthquakes when neighbours began to lookout for each other and communities rallied in a way not experienced before.

Sadly it also took the Second World War to bring Maori and Pakeha closer after Maori had suffered many years of persecution and the denial of basic rights in their own country. The Maori Battalion brought new respect for Maori even though they had proven to be extremely clever fighters during the land wars. Monty Soutar describes the huge cost that Maori had to pay to gain citizenship in his book about C Company.

It is unfortunate that it takes such terrible events to cause us to better value each other.