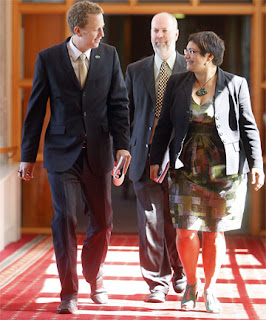 The National led Government's credibility is leaking out as rapidly as the private information that is flowing from our government departments. National Ministers now spend much of their time trying to distance themselves from poor decisions and endless privacy breeches. It is becoming obvious that most of the Government's solutions to our nation's problems have been ill-conceived and will be unsustainable:


Aucklanders want to live in a modern, vibrant city that has the same transport choices as those overseas. The Greens support of Aucklands own transport plan and greater spending on rail was enthusiastically received.

New Zealanders do not want to see Schedule 4 land being mined or Don Elder being rewarded for supporting the Government's costly coal addiction. New Zealanders want a real clean green future, not one that is maintained by hiding environmental degradation.

New Zealanders are alarmed about our levels of child poverty and the refusal of the Government to measure the problem or have a plan to deal with the causes of our shocking child welfare statistics. The Green's focus on solving child poverty is making sense to more people. Paula Bennett may be pushing more people off benefits but Family incomes are dropping and food parcel numbers are growing.

The thousands who rallied around the country last Saturday in support of our education system demonstrated huge opposition to the Government's agenda. The education system has been badly affected by the poor implementation of National Standards, league tables, and Novopay. The Government's plans to introduce Charter Schools and more funding for private schools is causing widespread concern.  The Government has already given private schools an extra $35 million and bailed out Wanganui Collegiate ($3.9 million) against advice. Providing more money to support our most privileged students rather than our less privileged is unconscionable. Making Co-leader Metiria Turei a spokesperson for education demonstrates the level of importance it has for the Party.

We are seeing billions of dollars worth of profits and dividends leaving our country to overseas owners and shareholders and this is not helping our current account deficit. The Green Party's plan to strengthen our New Zealand owned banks to compete with the big four Australian ones is gaining support and so is the demand to limit land and company sales to overseas buyers. David Clendon's  efforts to provide more support for our small and medium sized enterprises is being well received around the country. A broader and more sustainable approach is needed to strengthen our economy rather than putting all our eggs into the dairying and mining baskets and continually outsourcing.

Russel Norman's request for a proper independent inquiry into our secret services (GCSB and SIS) is being supported by academics and political commentators. While these agencies may still need to exist in some form the basis for their existence needs to have greater transparency and the level of oversight needs to be stronger.

While the National led Government is struggling to justify its plans and actions, the Greens are strongly positioning themselves as credible and visionary leaders.