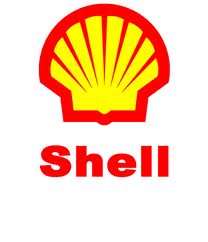 I attended Shell's invitation only meeting in Invercargill a day after their protestor disrupted one in Dunedin. Police were standing outside, but the guests here were more restrained and one attendee made a point of saying to Shell's exploration manager, Rolund Spuij, that he was welcome in Invercargill. 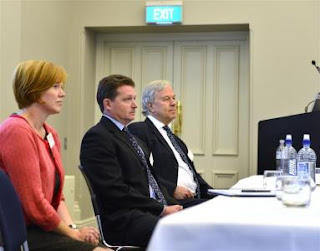 I actually have no problem with the actions of the protestors in Dunedin, while I don't think it is always the way we should engage with others it does send a clear message to Shell that there are people here who are aware of their real environmental record (the symbolic elephant in the room) and that they are being watched. While Shell may indeed have one of the better current safety and environmental records of the major oil companies, they are actually just one of the least damaging of a particularly environmentally disastrous industry. Like most profit driven entities, money will always come first and the amount of damage inflicted on local environments and communities, through the course of their business, is generally determined by what the people will tolerate or what they can get away with.

Third world countries have been particularly badly treated by the oil industry and protective measures, cleanups and compensation after major accidents varies greatly depending on the international status and influence of the people concerned. Shell's record in Nigeria is worse than appalling and the company still refuses to be accountable for the deaths and environmental devastation that it has caused. Shell has also been caught out by revelations that its drilling operations in the fragile Arctic were far from safe when equipment and planning fell well short of what would be necessary in that environment (Lucy Lawless was right). Shell has also been pulled up for obvious greenwashing and making ridiculous claims about the sustainability of their activities. When dealing with Shell we need to remember that we are dealing with a powerful oil company with a chequered history and huge resources and polished PR. 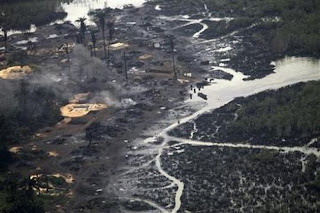 The devastation Shell has caused in Nigeria will take at least 30 years to manage and cost billions. 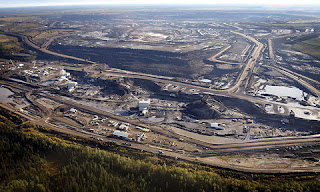 It is with this background information in mind that I attended the presentation from Shell. If I had not known about the reality of the company's operations I would have been blown away by the apparent environmental awareness being displayed. We were also told that the company was a very experienced deep sea driller and that 1400 metres was a mid range depth for them and the conditions expected in the Great South basin were within their capabilities, given Shell's approach to its Arctic activities I wasn't reassured.

The Government is very keen to have the oil industry active in our country and, despite the obvious risks that the industry provides, have gone out of their way to minimise scrutiny and protests. If Lucy Lawless were to repeat her rig climbing protest, after the proposed legislation becomes law, she could be subject to a $100,000 fine or imprisonment. I haven't seen any sign of legislation to strengthen the regulations around who is responsible for a major oil or gas leak or to increase the minimal budget given to Maritime NZ. This questioning from Metiria Turei in 2011 exposes the reality of our preparedness for a major maritime disaster:

2. METIRIA TUREI (Co-Leader—Green) to the Acting Minister of Energy and Resources: What emergency response, safety, and environmental protection provisions, if any, were included in the permit granted to Anadarko Petroleum Corporation to undertake deep-water oil exploration and drilling in the Canterbury Basin?
Hon HEKIA PARATA (Acting Minister of Energy and Resources) : Tēnā koe, Mr Speaker. Under the permit granted to Anadarko, it may drill one exploratory well. Before it does so, however, it must develop a discharge management plan that must be approved by the director of Maritime New Zealand.
Metiria Turei: Who will have responsibility for containment and clean-up if there is a catastrophic oil leak in the exploratory well that Anadarko plans to drill in waters 1,500 metres deep off the Canterbury coast?
Hon HEKIA PARATA: Maritime New Zealand.
Metiria Turei: Will the Government require a substantial bond from Anadarko as an insurance against the possibility of a catastrophic oil leak, which would cost New Zealand taxpayers billions of dollars to clean up?
Hon HEKIA PARATA: If Anadarko is to drill an exploratory well, it must provide a discharge management plan to Maritime New Zealand. That is the process the Government observes.
Metiria Turei: I raise a point of order, Mr Speaker. My question was not about a discharge permit; it was specific and clear: will the Government require a substantial bond to cover the financial liability?
Mr SPEAKER: I think the member raises a fair point. It was a straight question, and I think it does deserve an answer as to whether the Government would require a bond. It may not be appropriate to answer the question, but it was a straight question.
Hon HEKIA PARATA: Under the process of the stage that Anadarko is at, if Anadarko is to drill an exploratory well, it must prepare a discharge management plan. The plan does not include a bond.
Shell actually had some excellent information about the importance of developing sustainable and clean energy sources but the reality is that although this is an element of their business, it is only a small fraction of what they do and essentially a green front to their real activities. While Governments like New Zealand continue to make it easy for companies to profit from fossil fuels, they will continue to devote most of their energy to extracting this highly damaging and polluting resource. Once extracted, the oil or gas belongs to the company and although we will gain from some employment and royalties and tax (below OECD average), the rights to sell and distribute the resource and all profits would belong to Shell.  While our Government, our mayor and many in Invercargill have welcomed Shell into our midst I can think of many other industries that I would rather develop and support.

bsprout said…
I can't mention many names but there were representatives from Forest & Bird, Environment Southland, DoC (I think), the Invercargill Chamber of Commerce, Iwi, I recognised a local lawyer and there were a number of others.

I am sure that if you are really interested you could contact Shell themselves and I can't imagine them objecting to sharing the organisations that attended, but they may have reservations about the names.
April 11, 2013 at 12:49 AM

Unknown said…
Consultation is so well engineered - minimal parties to challenge to suit their purposes. Are we all not citizens/ratepayers of Murihuku at least.

I wonder if it's public consultation then they would should be able to provide notes from these meetings. I've not received any notes from groups so must look up our Council's for notes of this meeting. Details are important. Is there going to be a public meeting to engage individuals with developments of progress etc in Invercargill.
April 13, 2013 at 11:32 AM