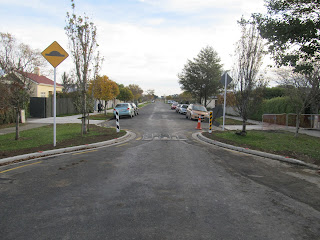 The Invercargill City Council consulted with us regarding improvements to our street. They were proposing to add speed bumps and narrowing the road beside each bump and planting extra trees. While the idea of the trees sounded nice, we didn't have a problem with speed or traffic on our street and it seemed a lot of expense when other parts of the city probably deserved greater attention. I was aware of a request for funding to landscape a shopping centre and car park in a low socio-economic part of Invercargill that had been supported in principle but with no money forthcoming. I was not aware of similar street improvements occurring in less affluent areas of the city either.

I wrote a submission suggesting the improvements weren't necessary and that there were probably bigger priorities elsewhere. I got no acknowledgement of my submission and a month or so later we were informed that the "improvements" were going ahead and would be starting a week later. We endured many weeks of construction noise and for three weeks had no use of our driveway while they reconfigured the drain, sump, driveway and curbing outside our house where the speed bump was being created.

Extra soil was placed in the extended grassed area, a mature deciduous tree planted and seed was sown. Our street is a tidy one and pride is taken in maintaining the frontages and I felt obliged to maintain the larger area of lawn and assist the grass growth. The new soil was full of thistle root (large thistles sprouted all over the place) and the grass seed appeared to contain swede seed or something similar. Now that the curbing extended up to the middle of the road, with the speed bump on the lower side of our driveway (we are on a slight hill), every time the drain blocked (regularly) we often had a pond form at the bottom of the driveway. 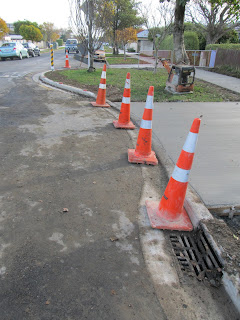 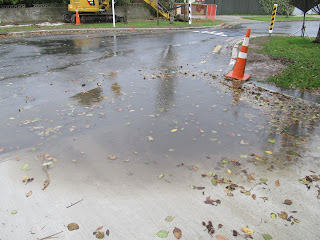 I dug up the thistle roots, removed the swedes(?) and used some spare grass seed to resow the many bare patches. I had to keep clearing the drain of debris arriving from further up the street because every time it rained it would block and a large pond would appear and a messy tide line of rubbish would be left if I didn't.

Within weeks of the work being completed Chorus arrived in our street to provide us with new cable. Again we had several weeks of disruption and all the newly prepared grassed areas were dug up again and resown with more of the substandard seed. I spent sometime ensuring the newly grassed areas were supported and weeds were removed. The thistles kept emerging from the earlier work and this is an ongoing problem.

Somebody must have complained about the substandard seed and the lack of growth because a subcontractor returned recently and applied some fresh soil and new grass seed. Even though I had managed to re-grass the area in front of my house, as many others had done, no allowance was made for this and the whole street was done regardless of their situation. 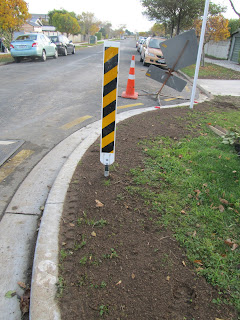 Immediately after this work was completed we were told that it was time for our street to get new footpaths and driveways. Our three month old driveway has now been removed and replaced and digging machinery has again mucked up the lawned areas that had been redone three times before. 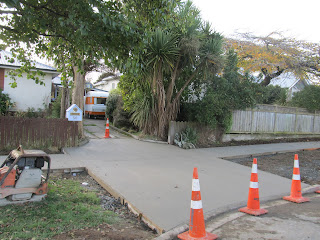 Our second driveway in six months.

I didn't want the speed bump, I am grateful for the new cable and the new footpaths and driveway will be good in the end. However I am completely blown away by the lack of coordination of the different work streams and contractors. The number of man hours, including my own, to lay our driveway twice and prepare and resow the grassed areas four times over a period of six months must be a huge waste of  council resources. All we really needed was the new cable which could have been quickly followed by the new pathways and driveways. Preparing the lawn once and making only one driveway, if there was better co-ordination, would probably have saved the council all that I pay in rates over the past year and I haven't factored in the cost of my own time.

I should say that the workers have been great, they have done an excellent job of what they have been asked to do and have worked quickly and efficiently in all weathers, it is their management that needs some attention.