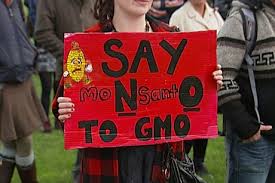 The genetic engineering debate is more complicated than many will have you believe. The view that those opposing GE are holding back useful scientific developments that will enable us to better feed a growing population is wrong and is just repeating the misleading promotions of a monopoly's interests.

The protests that occurred in New Zealand and around the world are a reaction to the dangerous dominance of Monsanto in determining the future of our food production. Genetic engineering may indeed have potential for good, especially if the way it is progressed is altruistically motivated and there are proper protections and controls in place for any research and application. Unfortunately altruism is not what drives Monsanto, the company that has a monopoly in seed production and distribution (as well as agricultural chemicals).

Monsanto protects its commercial interests with worrying effect. It has had laws changed to protect it from competition, buys out competitors and it protects its patented GM seeds with a vengeance (at great financial cost to many farmers). Monsanto has changed the culture of farming to one that is dependent on the use of patented seeds and chemical sprays. It is no coincidence that Roundup is now the dominant herbicide and "spray and sow" is considered mainstream farming practice.

Many farmers now have little choice but buy Monsanto seed as it is now too dangerous to reduce costs by saving seeds from a previous harvest. It is illegal to save and sow Monsanto seed and now that the seed is so widespread it is difficult for farmers to find seed that hasn't inadvertently included some patented seed. The cost of a potential law suit through accidentally using Monsanto seed isn't worth the effort and the monopoly quickly tracks down any wayward farmer that attempts to go it alone.

There has always been genetic modification to crops through selected breeding and natural selection and many regions still rely on more natural forms of plant modification. It is interesting to note that many countries using more natural methods are now out performing the US in crop yields and many who are reliant on Monsanto seed are seeing a decline and terrible human costs. It is now widely recognised that agricultural resilience is most likely to occur through increased biodiversity. Monsanto is doing its level best to destroy biodiversity for its own commercial interests, with little regard for the consequences.

It is in consumers' interests that food is properly labelled so that people are able to choose the kind of food that they would like to eat. Given the global reputation and concerns around GE food production around the world the ethical concerns for many people outweigh the possible health ones, but for either reason clear labeling should be provided so that a choice can be made. The GE industry has successfully fought to avoid being included on labeling and most people do probably consume GE in their daily food intake.

The concern for many in New Zealand is that this Government has shown time and time again that it will protect commercial interests above the interests of the people and it is more likely to accept US ideology and approaches than those of Europe. The Trans-Pacific Partnership (TPP) is being negotiated in secret and we know that US corporate interests will be pushing for a greater market share in the Pacific region. Many worry about the pharmaceutical industry's interest in reducing the effectiveness of Pharmac and we should be equally concerned at opening our doors to Monsanto.