Showing posts from November, 2015
Show all

National and the art of distraction 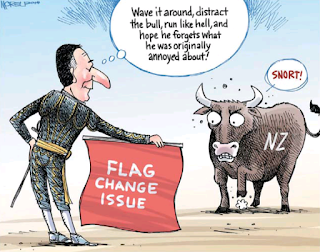 The failure of this National Government to properly address the big issues confronting this country is surfacing in numerous reports. However, the massively resourced spin machine, supported by Crosby Textor  influenced strategies, has successfully managed bad press since 2008 and continues to be effective despite the following: A damning CYFs report  from the Children's Commissioner revealed that the state was often a worse carer than the abusive families many children were being removed from. According to Principal Youth Court Judge Andrew Becroft , 83% of those in prison under the age of 20 have have a care and protection order with Child, Youth and Family.  The Citizens Advice Bureau have reporting a doubling of enquiries for emergency accommodation since 2010 (over 3,000 this year) as Government departments failed to help. An Education Review Office report on infants and toddlers revealed that almost half of early child education centres were not meeting the developme
1 comment
Read more 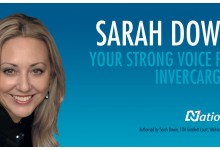 Invercargill's National MP, Sarah Dowie responded to a letter to the paper from P Burrows who had criticised the Government's record on climate change. Here are some quotes from Dowie's letter that was pure spin: "This Government is committed to act on climate change which is why we're continuing with the ETS and why we've set a target to reduce greenhouses gas emissions to 30 percent below 2005 levels by 2030." "We believe the target is fair and ambitious." "We've taken a balanced approach to setting the target without adding unreasonable costs to NZ households" This is my response published today:  MP Sarah Dowie’s letter (November 19) to The Southland Times was clearly an attempt to hide the dirty reality of her Government’s shameful record regarding climate change. Most European countries are already on track to make a 30% reduction in emissions by 2030 (from the 1990 base line) and they have a goal
2 comments
Read more 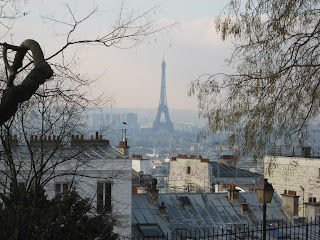 I have gone through a range of emotions after hearing about the 129 terrorist inflicted deaths in Paris . Paris may be on the other side of the world but I have French friends, I spent time in Paris relatively recently and my wife and son flew into Amsterdam the day after it occurred. I have some strong personal connections with the place and people and I found the news disturbing. I was reminded of the dilemma my wife and I had when visiting her family in England and we were due to arrive in London with our children the day after the tube bombings . 52 people were killed and 700 injured in those explosions. We made the decision to continue with our plans with view that security will be much tighter and it was unlikely that there would be a repeat. However, it was a difficult decision to make and it rattled our feelings of security and made us look forward to returning to Invercargill where such things are unlikely to occur. Many feel the horror of a "civilised" countr
Post a Comment
Read more 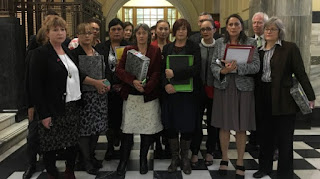 My unabridged letter to the Southland Times after realising how much is reported overseas regarding our internal politics: When I first travelled overseas many years ago I was proud to proclaim my identity as a New Zealander. In those days we were respected as a principled country that championed human rights. Back then Australians and New Zealanders recognised and valued our shared history and our ANZAC relationship meant something. How far we have fallen. My European and American friends now know that our Prime Minister urinates in the shower and has an unusual attraction to long hair (why should this be public knowledge?). We were once known as a great country for bringing up children but the OECD ranks us as 29 th out of 30 countries for child health and safety (below Mexico). When many countries are opening their doors to growing numbers of desperate refugees, New Zealand is ranked 90 th in the world for the numbers we accept per capita. Our Australian
Post a Comment
Read more

How low can Key go? 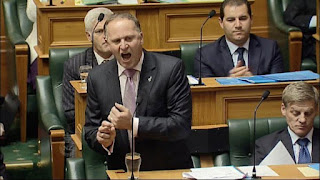 The Prime Minister's performance in the House  on Tuesday reached a new low when he accused the Labour of supporting "rapists, child molesters and murderers". After a question from Marama Davidson regarding Australia's breaches of human rights he even acccused Davidson and the Greens of similar: "If those members want to protect sex offenders, rapists and murderers, go ahead". It seems that the Prime Minister is happy to ignore issues of human rights if it is expedient to do so. While claiming to have voiced concerns about the detaining and deportation of New Zealanders for historical crimes to Tony Abbot at an earlier meeting, it doesn't appear that he expressed them very strongly. Key keeps repeating the fact that those being held in detention on Christmas Island are criminals despite the fact that many are being deported for historic crimes where a sentence was served and there has been no reoffending since. John Key and and human rights are
Post a Comment
Read more 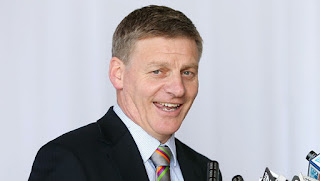 Bill English is a clever man, through an economic sleight of hand he produced the holy grail, a budget surplus . This was celebrated as a worthwhile achievement since the tax cuts for the wealthy had reduced the Government's income considerably (tax revenue plummeted from $44 billion in 2008 to $33 billion a few years later). It needed budget trimming and austerity measures in many areas and increasing revenue from other sources (like SOE dividends, more speeding tickets and borrowing $50 billion) to ensure the rich could continue enjoying their windfal l. The cost of the budget surplus is being paid for in other ways: Health Hospitals are not able to function when funding doesn't keep up with population growth, a greater percentage of elderly and exploding diabetes rates. The Southland District Health Board has a commissioner to force through more cuts to live within an impossible population based funding regime and the Canterbury Health Board has had to get a $15
2 comments
Read more
More posts