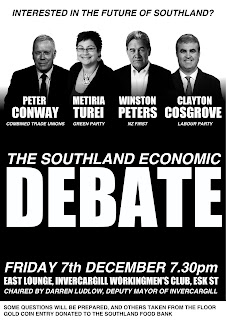 Like many regions the Southland economy is suffering. Our largest employer, the Tiwai Smelter,  is cutting staff and threatening closure, many of our meat works are also down sizing and there is a real possibility that we could lose up to 4,000 jobs. Local CTU convenor Anna Huffstutler decided that because the Government was taking a hands off, "the market will decide" approach to our impending crisis that something needed to be done. She organised a debate* and invited political parties, the Invercargill Mayor, Tim Shadbolt, and the CTU National Secretary, Peter Conway. By doing this Anna hoped to bring the issues into the public domain and force those who are in positions of power to present some solutions and possibly get some commitments for action.

Interestingly Invercargill's National MP Eric Roy could only make a day that didn't suit the other invitees and so Anna approached Clutha Southland MP Bill English, but he also was unavailable (as was Steven Joyce). It appeared that National couldn't get one of their 59 MPs to represent their Party at this important debate. Russel Norman couldn't attend because his second child was due, so co-leader Metiria Turei put up her hand to ensure a Green presence. Winston represented his party and Clayton Cosgrove attended for Labour as their spokesperson for commerce and trade (and replacing the initial representative, David Cunliffe).

National's reluctance to front up was reported in the local media which resulted in criticisms of the organisation of the event from Eric Roy who also complained about the lack of flexibility to work around his Stewart Island hunting trip. It would have been a better debate if National had fronted up because all those who did attend largely sang from the same song book (apart from Tim Shadbolt who promoted his latest idea of drilling tunnels through mountains to irrigate farmland and was accused of tunnel vision by a quick witted Peter Conway).

What was revealed in National's absence was that there was a great deal of unity amongst the parties that would potentially form the next government. Judging by the response from the 100 or so people in the audience (large by Invercagill standards) there was a good deal of support for the answers provided.

As a brief summary the following points were made and I haven't attributed them to any particular party as there seemed to be a general consensus (and at one point Shadbolt himself noted that if people wanted positive action then they should vote for the parties present):

What was abundantly clear to those who witnessed the debate was that the attempts from the Right to promote the view that any coalition of the left wouldn't last had little substance. While Winston Peters lacked the depth and detail in his answers that others provided there was still considerable agreement between them and an especially common view that proactive governance was desperately needed. I had the impression that if there was to be an election the following day, Eric Roy would be lucky to hold his seat. 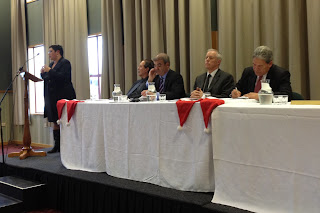 *My son designed the poster, which later was subjected to some creative additions from a local National supporting blogger.

robertguyton said…
Good poster (clever lad!)
I thought Winston was his usual showman self, spending a lot of time strengthening his popularity in he South and making glad-eyes at Shadbolt. Peter Conway was really on the button with his assessments and comments. Metiria's contribution was measured as was appropriate. She and Conway were in agreement with most things. Cosgrove hammered the Nats effectively. He seems a classic Labourite. The audience was an interesting mix - plenty of folk I didn't recognise, perhaps they were unionists or Labour supporters. Certainly some were NZ1st supporters. The Green camp, I did know.
December 8, 2012 at 8:37 PM

bsprout said…
An appalling report in the Southland Times apart from reporting who was there this was all that was covered regarding what was actually said:

"Mr Shadbolt suggested Rio Tinto should sell the smelter to the Chinese who were looking to do business."

"Mr Cosgrove said the sale of state assets must be stopped and Mr Peters said the New Zealand dollar had to be devalued."

The Times also had a live feed with regular tweets during the debate, but again the coverage was pitiful.

bsprout said…
Dear Sir
On Friday (December 7) our Mayor, the National Secretary of the CTU and two leaders and a spokesperson representing three of our four largest political parties came together to present possible solutions for Southland's economic crisis. The East Lounge of Invercargill's Working Men's Club was packed full of people and many pertinent and difficult questions were asked.

All five political leaders expressed views and described solutions that were at odds with our current governance. What was said at this meeting would have been of great interest to the readers of this newspaper, especially when there is a possibility that the three political parties represented may make up our next government. Our province may very well be shaped and influenced by these same individuals in the near future.

The article covering this debate in Saturday's paper (December 8) devoted only two sentences to what was said. I do hope a more detailed and thorough report, including some informed analysis, is still to be published.
December 9, 2012 at 1:11 AM

Shane Pleasance said…
I was not able to attend in the end.
Could you provide a reflection of what was said?
December 13, 2012 at 5:00 PM