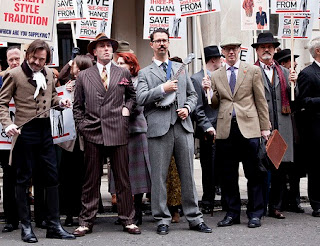 The National Party experienced large protests outside its conference after being in power for five years and now it was the Greens turn to experience something similar outside their 2019 AGM.

The suffering under a Green Government had been substantial for the thirty who had gathered outside the conference. A number carried placards and several emotional speeches were made through an expensive portable sound system.

One speaker, a property developer, barely managed to finish his protest speech before breaking down as he described the suffering he had endured after the introduction of a capital gains tax and being forced to build lower cost housing. He explained how his profits had been halved and he was having to consider selling one of his three holiday retreats.

A luxury car dealer held a placard with the inscription "Save Our Cars". The Greens had almost killed his business as many of his wealthy customers now preferred to commute by train and were buying smaller electric cars and even bicycles. "This is no longer the New Zealand I loved," he lamented. "All these bicycles and trains everywhere is making Auckland more like Zurich or one of those other foreign cities."

A couple of dairy farmers poured milk into a gutter in protest at how difficult it was to sell their milk. Stricter environmental regulations had meant than unless they met the environmental standards their milk wouldn't be accepted for processing. "All this concern about about swimming in our rivers is a nonsense," complained one, "that's what swimming pools were for!"

An elderly investor was almost beside himself with fury. He had invested his life savings in Meridian shares and had seen their value drop as power prices plummeted. "People may have cheaper power," he fumed, "but what about us share holders?"

The one female in the protesting group held a placard "Bring Back Choice". She explained her frustration at not being able to tell which school she should send her children to. "Since the Green Party has insisted that all schools should be supported to provide a good education, how do we know which is best?" she complained. "Now that we have little poverty all children seem the same. One used to spot a poor school because the children had no shoes and didn't carry lunch boxes, they all look the same now."

Opposition MP, Stephen Joyce was found amongst the protestors, he looked a little uncomfortable and admitted it was his first protest. Despite the Greens remaining high in the polls he insisted that they had no idea how to govern. "All this consultation and listening to expert advice is a nonsense and just shows how weak they are," he claimed. "A National Government provides true leadership, we are natural rulers, just ask Hollywood or any oil company and they will tell you that we were the best government that they had ever dealt with."

Joyce was sure that once the lengthy investigations regarding the mismanagement of the Bain appeals were completed then National leader, Judith Collins, would be fronting a strong campaign in 2020.

Shelterd Life said…
I concur with your conclusions and will eagerly look forward to your future updates. Saying thanks will not just be sufficient…
meetings in los angeles
August 31, 2013 at 10:51 PM