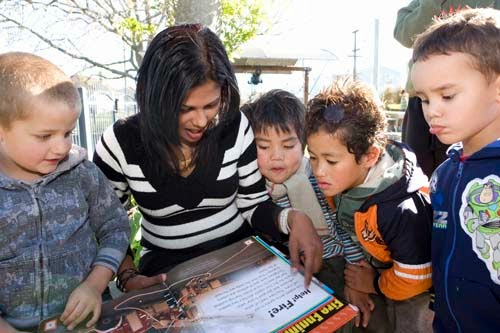 The Ministry of Education is tightening the National Standards net. Until now it was largely the comprehensive ERO reports that determined the performance or success of a school, now it is mostly about achievement levels in literacy and numeracy.

It was recently revealed that schools have been placed into three categories, those doing particularly well were to be called "no touch" schools, some were going to receive a "light touch" and the worst performing would need a "firm touch" from the Ministry. Principal Pat Newman caused some hilarity when he asked where the touching would happen and who would do it, and "what legal recourse will a touchee have if the touching doesn't come up to expectations".

In reality it is no joke, while the original titles for each group no longer exist, many Principals have discovered (around 800) that they meet the criteria for a firm touch. It became clear that practically all those notified were low decile schools. The key factor, despite all the other triggers listed (ERO reports and Charter compliance), it was the school's National Standards achievement levels that were the main determining factor.

There is a high level of anger and outrage from the recipients of these damning notifications. One principal I know was particularly upset, her Decile 2 school is well regarded and recently received a good ERO report that places it in the normal 3 year cycle. The majority of the pupils in her school are Pasifika and the rest are Maori or recent migrants. For a large proportion English is their second language and some speak up to three languages. The school is a happy, vibrant place, the children are enthusiastic learners, the teachers highly dedicated, but it is unlikely that the literacy and the numeracy achievement targets set by the Minister will ever be reached.

The notifications in many cases have been delivered in an almost apologetic manner, but the message is clear, these narrow, ideological targets (based on ropey assessments) are determining what success looks like in our primary schools. According to this Government socio-economic factors have little bearing on teaching and learning and a child who speaks three languages (but none of them English) cannot be considered competent in literacy. By bulldozing through this highly ideological system we are creating winners and losers and the collateral damage will include many wonderful children and schools.

Metiria Turei was correct, this Government is out of touch and our children deserve better.

Unknown said…
Brilliantly said and totally on the button. May I have permission to reblog, please (linking back here). Thank you, Dianne, Save Our Schools NZ
March 9, 2014 at 7:07 PM