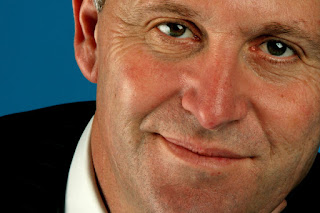 Anne Tolley spoke reassuringly to a family who were settling their children down on their cardboard beds for the night. "I have a nice warm motel for you at $120 a night, " she offered. "You can pay us back  in your own time and without interest. We really care about your situation and I am concerned about your disabled daughter."

Paula Bennett sidled up to a dreadlocked man with a long tangled beard who was cocooned in a grubby sleeping bag. "Pssst!" she hissed conspiratorially. "Here's $5,000 if you leave town."

Nick Smith tapped on the window of a battered van, the interior of the windows were running with condensation and carrier bags of belongings were stuffed in every available corner. "Don't worry...," Smith said to one of the many occupants as the window was wound down, "I'm just converting a traffic island into special housing, I've got the consents."

Gerry Brownlee became exasperated at the negative response he got from young Maori couple with a baby. "I'm sick and tired of your carping and moaning!" Brownlee blustered. "I know you have been living this way for months but you need to know that we are doing everything we can to help you."

Steven Joyce took Brownlee aside. "There, there Gerry," he said soothingly, "they just don't understand that these things take time and they are just one of many who need support. Media Works are struggling again too."

Bill English was addressing a group spread across some sheltered steps. "...so then we found that they were all the wrong size and in the wrong place. You see the Government isn't very good at social housing so we are better out of it altogether..."

Judith Collins stood with her hands on her hips and spoke firmly to the man lying at her feet. "I don't care if you found the jacket in a skip, it looks like a patch to me and I'm not helping any member of a nasty gang!"

As the Government Caucus moved down Queen Street sharing their words of hope and compassion the Salvation Army followed some distance behind, doing what they always do, dealing with the human casualties of yet another National Government.