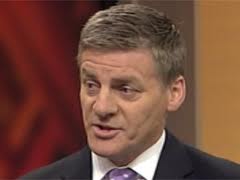 When it was learned that Bill English was attending a "consultation" hui on the Murihiku Marae (regarding the future of Section 9 in the State Owned Enterprise Act), some of us decided it was an opportunity not to be missed. We organised a protest at the road entrance to the marae and stood with the media and our placards for the arrival of Bill in his BMW. The protest had limited value as the car flashed passed in a few seconds and I doubt if Bill could have read even one of our many messages. The local runaka (runanga), however, were particularly welcoming (as many supported our views) and we were invited in to participate in the proceedings.

Bill explained, and admitted, that because of Section 9 the government, in good faith, had to consult with Iwi about ongoing treaty obligations during the sale process. Once the assets were removed from the SOE Act and into the control of the Public Finance Act, unless the government introduced a particular clause to recognize the Treaty there would be no reference to it. Any introduced treaty obligations would only apply to the government in the "mixed ownership" model and the owners of the other 49% would be exempt.

Bill was asked if this consultation was just a necessary process to enable them to tick it off because there was no way the sales could be stopped from proceeding. This was confirmed in his reply and Bill made it clear that National had campaigned on asset sales and they had a mandate to continue with them. This statement was not received positively by the majority of those present and there were a number of questions about the true value of doing so.

Interestingly Bill took the line that there was greater advantage in selling the assets to generate revenue than to hold onto them for the dividends they produced over the long term. When he was questioned to provide more detail about the annual dividends expected compared to the estimated $5 to $7 billion generated from the sales Bill muttered that he didn't have the exact figures as they were difficult to properly quantify but thought there was only a 2% return currently. This was met with general laughter and disbelief and someone asked rhetorically - if the returns were that low, who would buy?

The New Zealand Maori Council had representation at the hui and a statement from their Chair, Sir Graham Latimer, was distributed. Sir Graham had the view that the sales could not go ahead until the ongoing issues around Maori rights to water had been settled. He believed that because most of the SOEs up for sale were hugely dependent on access to water that there would be future litigation and difficulties if this issue wasn't resolved first. Bill had the view that the same issues existed currently and did not effect the ability for the SOEs to function and any further negotiation could just continue in a similar manner with the new owners.

I asked a question regarding the government's commitment for progressing sustainable revenue sources rather than opting for short term fixes that would deprive my children of a valuable public asset. I cited the annual $2 billion loss of revenue through providing tax cuts to the wealthy and the government's dependence on Australian Banks that have  shifted $9 billion in dividends to Australia over the last few years. Bill answered that by getting some cash to invest in essential infrastructure like schools and hospitals without having to borrow would boost our economy. He ignored my reference to the tax cuts. He suggested that we all could shift banks if we didn't like the Aussie ones but didn't mention that the Government itself uses Westpac to manage their money.

I later asked for clarification on what the legal standing and authority of any treaty clause would be when our free trade agreements would become part of the mix. I cited the concerns with our agreement with China and the secret discussions that are currently occurring within the TPP (Trans Pacific Partnership).  Although I know that there can be no legal assurances around protecting treaty obligations within any free trade agreement, Bill shrugged off the question by saying the legal interests of Maori are not under threat. He went on to say how wonderful such agreements were because they opened markets for our exports were were an essential part of our economic viability.

I don't think Bill's performance was convincing or reassuring for those who attended and I felt there were many potential signatories for a petition supporting a binding referendum on the issue.

robertguyton said…
Good for you, bsprout. Like you, I suspect the only reason for these hui is so that National can tick off 'consulted', regardless of what was discussed there. I think the various Runaka will be mightily p*ssed off if their concerns are not given weight.
Bill already blew it at Te Rau Aroha. Sounds like he's gone a long way to doing the same at Murihiku Marae.
February 14, 2012 at 6:18 PM