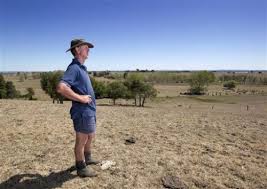 Steven Joyce just didn't get the importance of Russel Norman's questioning in the House yesterday. He was genuinely perplexed why anyone would want to get get a definitive response from him (and the finance Minister he was speaking for) around his understanding of climate change science. He wasn't prepared to accept that the drought we have been experiencing was most likely caused by anthropogenic climate change:

"I think that the second part of that member's question is open to debate, actually, by a whole range of experts."

Russel's line of questioning actually established a fundamental flaw in the Government's approach to dealing with this major crisis; it isn't convinced that there is one.  Joyce explained that while the Government were providing assistance for farmers in this instance that they would be expected to adapt to climate change (as they have adapted to economic and technological change) and shouldn't expect ongoing support. It was a problem that farmers ultimately had to deal with not the Government.

Russel tried an even more direct approach and after referring to NIWA's climate predictions asked:

Joyce suggested that unless we had a series of droughts there was no evidence that we needed to have such a plan, the only mitigation necessary was dealing with the current situation.

An important driver for any change is the belief that it is necessary and if that belief doesn't exist then the change process will be half hearted or nonexistent. If this Government truly believed in anthropogenic climate change then they wouldn't have withdrawn from Kyoto, they wouldn't have watered down the ETS to a level where it virtually serves no purpose and they would be chasing a future in fossil fuels.

If decisions being made have a direct and negative impact on the climate then Kennedy Graham was quite correct in accusing this Government of "ecocide".  Climate Change is not just a political issue it is a moral one and if we want a future that isn't dependent on high levels of greenhouse gas emissions  (New Zealand has one of the highest per capita in the world) then we surely won't get it through this denier Government.