Of Polls and Possibilities 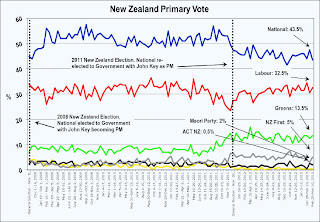 The graph above, produced after the latest Roy Morgan Poll, shows a steady decline in support for the National Party, a perceptible increase in support for Labour and solid support for the Greens. New Zealand First remains around the 5% threshold and the Maori Party, Mana, Act and United Future barely register.

The Greens have traditionally dropped in support between elections, however, since November 2011, the Greens have been polling significantly higher than their election result. It is also interesting to note that the Green's support has been more consistent than Labour with fluctuations of around 2% while Labour has seen almost 4%.

With its union background Labour has, in the past, had a well organised membership and strong electorate teams. However, the Keep Our Assets campaign signaled a significant shift in organising strength when the Green Party collected over double the petition signatures that Labour supporters did. Membership levels are also becoming similar, with Labour claiming around 5,000 paid members and the Greens about 4,000. What is also significant is the Green Party's ability to rope in non members to support their campaigns.

It is clear from the Graph that support for National is in steady decline and that their natural supporting party, ACT, is in its death throes. It is also apparent that MMP has reshaped the political environment so that it is unlikely that any political party will be able to win an election outright. Voters now have the ability to mix and match parties to shape the kind of government that they would like. It is not just policy that will dictate voter preferences, but style. While National's authoritarian style may suit some people, New Zealanders do have a great sense of fairness and justice and the dictatorial manner of managing school closures and budget cuts, with limited consultation, has rankled many. Many voters are beginning to realise that when a coalition government has one very dominant party, the minor parties struggle to rein in the excesses of their much larger partner. Consequently we have the National Party claiming to have a mandate to sell state assets with 47% of voter support.

National, and Labour to some extent, have managed to dismiss the Greens in the past as a small fringe group of environmental activists but, with 14 MPs in parliament and significantly more resources, this image is now difficult to maintain. All of the Green MPs have had media presence and the leadership team of Russel and Metiria have provided a real challenge for the Government. With Labour's desperate efforts to promote Shearer as leader, their MPs have had to take a back seat and now many people can name more Green MPs than they can from Labour.

I have been aware over the last few elections that the final vote for the Greens has often been lower than the last polling results. I have surmised that while people preferred Green policy they just didn't have the impression that the party had the depth, or capability of personnel, to to carry them through in Government. Now that the Greens have managed to gain more media exposure it is difficult to dismiss the likes of ex West Coast Health CEO Kevin Hague as a looney tree hugger with no experience of Governance. Gerry Brownlee (ex carpenter/woodwork teacher) once made the mistake of dismissing some intense questioning from Green MP Julie Anne Genter by ignorantly suggesting that she knew nothing about transport (now he tries to deal with her by making disparaging remarks about transport consultants).

In 2014 the voting public have some real choices, they can vote for the status quo of a rampant, ideologically driven National led Government (with essentially neutered partners) or a real coalition Government where a mix of expertise and governance style provides exciting potential. Also the often expressed concern (promoted by the right) that a coalition of Labour and the Greens may unstable and fraught is not supported by evidence. The two parties already work together on a number of campaigns (manufacturing/asset sales) and the Greens are far more predictable and stable as a party than ACT or New Zealand First have been in previous coalitions. The next year and a half, before the 2014 election, is a chance to explore some real possibilities.