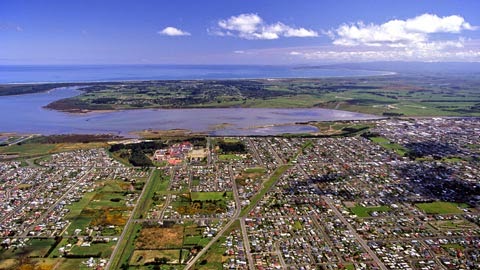 Invercargill provides a good snapshot of New Zealand society. We are a city of around 51,000 people and have a breadth of industries to support our local economy. Within our wider province we have an aluminium smelter, New Zealand's largest dairy factory, a number of exporting manufacturers and the region earns about 12% of our national export income with only 3% of the population. We also have a highly successful tertiary institution in the Southern Institute of Technology (SIT) that pulls in overseas students and provides a wide range of courses to lift the qualifications and skills of our local workforce. Venture Southland is proactive in promoting the region and leading research and development to grow a more sustainable local economy.

We are also ethnically diverse with growing Maori and Pasifica populations and many immigrant workers. We have an unemployment rate that is similar to the national average of just above 5%.

I recently wrote a post about inequality and income distribution in Invercargill based on the previous decile ratings of our school communities. Those ratings were based on the 2006 census and I thought I would do a reassessment based on the new ratings that have been revised using the 2013 census.

One would expect that the income distribution in a highly productive community, with such low unemployment, would fit the familiar bell curve. Most households should be earning good incomes, a very small group struggling financially and a similarly small group that are very affluent. This isn't the case.

Out of 28 school communities 11 have a 1-3 decile rating and despite strong economic growth in the region over the past three years we have a decile 1 school for the first time since 2006. Our very poorest have got poorer. 9 schools have a decile 4-7 rating but 3 of these are decile 4 and only 1 is decile 7. We now have 8 schools that are rated in the affluent decile 8-10 group (down one from 2006).

The median income from all sources for those of working age in Invercargill is only $27,400. Only 23.5% of us earn more than $50,000 and almost 37% earn less than $20,000. A living wage is currently estimated at 18.80 an hour to give an income that would allow workers to "live in dignity and to participate as active citizens in society". This comes out at $39,000 annually for 40 hour weeks over a full year. Given our statistics probably around 60% of Invercargill people eligible to work do not earn a living wage.

I believe that Invercargill people and the Southland region are doing more than our share to support the national economy and to try and stand on our own feet. It is central Government that has failed us. Our hospital is underfunded and in crisis, we have had no social housing built since the 90s, our road funding has been cut, local state sector staff have been cut (DoC and the IRD) and the cost of electricity has caused energy deprivation for many. We no longer have any emergency housing for those in desperate need and there are plans to sell off most of our existing state housing (the money generated is unlikely to be injected back into our community).

As with the rest of New Zealand there are more early childhood centres and aged care facilities being built and the service industry is growing. Despite creating more employment the developers of many of these new businesses are subsidised by our taxes but most only pay the minimum wage to their workers to maximise returns.

John Key claimed on election night that he was going to work for all New Zealanders, he hasn't up till now and he has given no indication of when that work will begin. Meanwhile inequality grows and the future for most Invercargill people (especially children) under this Government is looking bleak.

Paranormal said…
Perhaps the intention behind your headline is misleading? Yes Big Government can make you poor, but not in the way you think.

Could it be that Invercarrrrrgill is responsible for it's own (according to you) relative poverty?
December 2, 2014 at 5:07 PM

bsprout said…
Paranormal, I'm sure there is some element of truth to that but by and large central Government has the largest influence.

It is this Government that has reduced funding to our DHB, cut the funding for road maintenance and cut local DoC and IRD jobs. National also supports an employment environment where casualisation reduces income security and many people are under-employed.

Many of Southland's largest employers (supermarkets, rest homes, early childhood centres, fast food outlets and cleaning firms) pay the minimum wage, and few can live on those wages without income support. Many dairy farm workers actually work on wages beneath the minimum.

The SIT has many courses that provide useful skills and qualifications but despite the 'zero fees' students still end up with sizable debts and the jobs they move into don't always allow them to pay them off quickly.

The cuts in ACC support under this Government has also meant that there are many forced to work part time or live on sickness benefits.
December 2, 2014 at 6:51 PM