Sustaining today by denying the future

- May 25, 2015
When I attended primary school over four decades ago the importance of saving and being financially secure was strongly encouraged from an early age. Our little deposit books from the Post Office Savings Bank had a squirrel on the cover to remind us of the importance of putting something aside to ensure a comfortable future. School banking ensured that a culture of responsible economic management and preparing for the future was ingrained at an early age and schools were rewarded for their efforts: 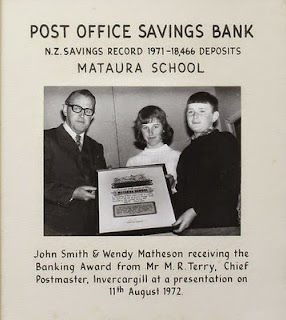 On leaving home I put money into a home ownership account with the Southland Building Society and after ten years it matured into sum that enabled me to pay the deposit on my first house. In 1987, as a young teacher of seven years experience, I was able to make an important property investment. My $5,000 deposit was able to purchase a house with the same value as my annual salary ($27,000), a tidy three bedroom wooden bungalow in a good area (admittedly in Invercargill). My financial future at that point was relatively secure, I had reasonable certainty of income and had a capital asset that would retain or grow in value.

My son has had different experiences from me financially and has a much more uncertain future.

While we encouraged both our children to save money in their own accounts, banking in schools was no longer supported. Bank fees were also excessive for accounts holding small sums and returns were minimal. It seemed to make more sense to spend money rather than have it lose value in the bank.

Despite putting money aside in an education savings scheme to help pay for my son's tertiary education, and he was able to earn money through holiday employment, a student loan was inevitable (and encouraged). My son, with the support of his parents, has managed to limit the size of his loan to well less than the average, but it is still a substantial amount that needs to be paid back. Depending on the qualification, student loans of $40-100,000 are common. Having just completed a useful degree (Design Innovation) my son has no guarantee of employment where his skills can be fully utilized and we have a country where graduates earn less than most in the OECD. 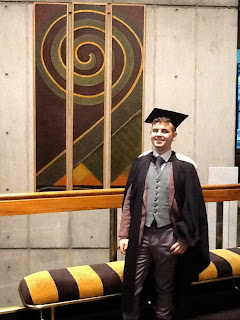 After five years, if my son is able to find a job related to his qualification, he can expect to be earning around $50-60,000 a year at age 27. Rather than saving money for a deposit on a house with his initial earnings my son will still be trying to pay off his student loan. Even if he was in a position at that age to buy a house similar to my first one (in the same area of Invercargill) he would be looking at a house worth around $160,000 (around three times his annual salary) and will be needing a $24,000 deposit. The cost of housing in relation to income has increased at least three times since I bought my first one.

By the time my son has paid off his student loan and has saved enough for a deposit on a house he will likely be in his mid thirties. By that stage I was living in my third house, which is our current home, and was concentrating on bringing up a young family.

Most young New Zealanders looking to buy their first house do not live in Invercargill and $250,000 to $300,000 would be the cheapest price range for the majority of areas where our population is concentrated, five to six times the annual salary my son will be potentially earning. We now have a future generation where house ownership is practically an impossible dream. Removing the Government kickstart for Kiwisaver is effectively knocking out yet another support that once made home ownership possible.

The latest budget threw some extra money at the poorest beneficiaries but it is clear there is little support in helping most young New Zealanders in having a secure future in the manner I enjoyed. Young academic, Andrew Dean, describes in a recent book Ruth, Roger and Me how his generation's future has been considerably compromised by economic decisions made in the past

When the cost of financing superannuation and supporting our elderly is approaching $800,000 extra each year, there is a widening divide between the wealth and welfare of our retirees and our youth. For a country with a strong economy, rich in resources and a relatively small population, surely there should be some expectation of home ownership and financial security for following generations. It appears we are already exploiting and borrowing from my son's future to support today's inequitable and unsustainable economy. The concept of investing in our future appears to have disappeared with school banking, our children must do the best they can with what little we leave them.

Keith said…
Our own life story is very much like your one, right down to working in the same profession. Our three children are all university educated, a scientist, software engineer and teacher. Like your son they face the same problems. Thankfully all no longer have student loans, but two of the three are now living and working overseas, with little likelihood of returning here. We as also living overseas following the closure of Christchurch schools post earthquake. For struggling young people the grass not only appears greener on the other side but actually is so our talented young people leave for a more secure life financially overseas. Not what we need for the future of this country either.
May 25, 2015 at 8:23 PM

bsprout said…
You are right, Keith, the current attitude is nonsensical if you consider our young graduates as a valuable resource. To allow all this talent to slip out of our county and not support a higher wage economy makes me wonder what the plan really is. Or perhaps there isn't one...
May 25, 2015 at 10:43 PM

robertguyton said…
What do you make of the latest poll Dave? Seems National's story-telling abilities are keeping them incredibly popular, despite the Auckland housing crisis (there is no crisis), the assault on a waitress by the Prime Minister (just horsin' around) and the rest of it. What has happened to New Zealanders? Are we hypnotised or something?
Yes, we are.
Robert

bsprout said…
Yep, the Government gets all the attention at budget time and Labour hasn't come across well. Immediately after an election the Government tends to have the upper hand while opposition parties regroup and plan strategy. I would suggest you read Jane Cliften's latest Listener column and in the latest North and South, an interview with Carrick Graham makes interesting reading. In the same issue the subeditor of N&S writes a hard biting article regarding the unravelling of our democracy, the smoke and mirrors economic management and the micro management of John Key. The dumping of John Campbell has rattled the cages of a number of our more able journos (even the right leaning ones). National Radio has focussed on the incompetent Government management of the Relationships Aotearoa mess (when the courts get 900 cases returned to them they aren't going to be happy). The clever media management of Government failings will not cover the messes of under funding, angry NGOs, and all the people missing out on essential services. The regions are also starting to get a little cynical and what we saw in Northland is being reflected elsewhere. The winds of change are beginning to rustle some leaves ;-)
May 26, 2015 at 10:08 PM

robertguyton said…
From the Standard:
"Richard Harman concluded his presentation to the recent Fabian “Destination Next Progressive Majority” event by quoting the noted political scientist Bob Chapman’s remark that he had “reluctantly come to the conclusion that it was far more important for a political party to have a communication strategy than an economic policy.” I’m inclined to agree."

These principles are abstracted from Jowett & O’Donnell.( Propaganda & Persuasion)

Avoid abstract ideas – appeal to the emotions.
Constantly repeat just a few ideas. Use stereotyped phrases.
Give only one side of the argument.
Continuously criticize your opponents.
Pick out one special “enemy” for special vilification.
May 27, 2015 at 6:54 PM