Schools, Beards and a Civil Society

The story of the student sent home because he had unshaven stubble on his face has sparked another debate on the extent of authority a school should expect to have over its students. This is an important discussion because it goes to the heart of the purpose of education and what we would like as educational outcomes for our young people and the future of our country.

I was privileged to attend a secondary school in the early 70s that was very much at the forefront of educational thinking. Invercargill's Kingswell High School began in 1971 (I started in '72) in the less affluent part of Invercargill and was led by respected educationalist, Graeme Gillespie. The school endured a lot of criticism for rejecting many of the traditional elements that most secondary schools support (and still do). We had no uniform in the senior years, no prefects, no traditional prize givings (recognising academic achievement), no corporal punishment (common at the time) and a strong focus on extra curricular activities and outdoor education.

Gillespie believed strongly in creating a school culture that encouraged student empowerment, civic engagement and removing barriers to success for students from less affluent backgrounds. The school expected all students to be the best that they could be through hard work and respect for others (constant themes at our assemblies) and recognising service (citizenship awards were considered the highest accolades). The school was run democratically with the student council (representatives from every class, including third forms) having a prominent leadership role.

Despite no official uniform there was still a dress code that was determined by the students and when given that responsibility we actually set high standards. The photo below is my sixth form year in 1975 and when you consider that this is a group 17 year olds (and make allowances for the era) this is a smartly dressed group for a lower decile school. 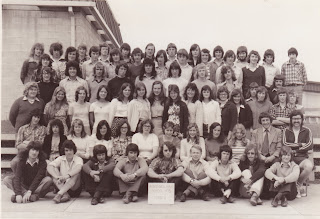 I am second from the left in the front row

You will also notice in the back rows above, a few male students with substantial facial hair (click on the image to make it larger). The student council had requested that students who were able to grow beards and moustaches could do so as long as they were trimmed and tidy. Principal Gillespie could think of no good reason why the request should be denied. He believed that facial hair did not create a barrier to learning and making rules around this was more about adult control than the individual development of the students.

Kingswell High School had some success in providing a range of experiences for students outside of what could be provided by many of their lower income families. Senior Teacher Austin Brookes led an intensive outdoor education programme that provided students of every year an Outward Bound type experience that involved self-discovery and an appreciation of our natural environment. At the end of my five years of secondary school not only had I achieved University Entrance but I had also kayaked and rafted wild rivers, climbed mountains, abseiled, tramped, skied and explored caves.

Despite not having academic awards my year group were still very focused on academic success and making the most of opportunities. A good number of us ended up in the same student hostel in Dunedin and it was obvious that the Kingswell students had a level of self-assurance and leadership skills that made us stand out from others. For students from most other schools, the freedom of making decisions for themselves was a new experience and many went to extremes in a rapid journey of self-discovery.

My Kingswell High School education had helped install in me a sense of individual responsibility, an ability to work co-operatively to achieve goals and the importance of community service. While I had the advantage of supportive parents and a professional background, all students at my school were able to access experiences similar to my own and many have gone on to leadership roles within their communities.

I am immensely proud of my own children's academic achievements (I attended my son's graduation two days ago and my daughter is in her second year), but I remember attending many high school prizegivings, where year after year the same students received the top prizes. The academic elite were clearly defined and rarely changed, their parents were generally high achievers and it was my view that the student's family backgrounds determined education success more than anything the school could claim.  I often feel that secondary schools celebrate the successes of individual students when they have had a minor part in that achievement. Walls are often covered in photos of students who have achieved national recognition in sports largely supported outside the school. How useful is it really to focus the majority of attention on those who will succeed despite the school. Although both my children had teachers who had very positive influences on them, they weren't essential to their later success.

I encouraged both of my children to involve themselves in the extra curricular activities that their respective schools provided but neither had the opportunities or breadth of experiences that I had enjoyed. I actually support NCEA and believe that students have a much larger range of subjects to chose from and the academic standards are actually greater than in my day (judging by the experiences of my children) but I believe academic achievement is only one determiner of future success and contribution to society.

By focussing heavily on academic achievement and having strict rules around uniforms and personal presentation, compliance to authority then becomes extremely important. It all sounds nice and tidy and orderly and many will see these priorities as perfectly reasonable. However if we are wanting to produce future citizens who are resilient in a rapidly changing world and are able to find creative solutions to our social problems perhaps we are failing. Surely we should be empowering our young people by allowing them to discover themselves in wider contexts, respect their opinions and give them more opportunities for self determination in democratic forums.

Young people are far from perfect, they are often impulsive and egocentric, but they are not stupid. With supportive mentoring, being given more responsibility and self determination actually teaches worthwhile decision making skills and independence when making inevitable mistakes can be managed.

The experiences of many students in our education system are not always positive ones if academic achievement is difficult for them. From the age of five our students are now assessed by narrow standards and ranked against their peers. In reality such ranking is unlikely change throughout their school career and will also become a self fulfilling prophecy (there is less social mobility than ever before). Any attempt to somehow standout in any nonacademic way is generally not encouraged. The high suicide rate in our youth is an indication of low self worth and a feeling of powerlessness.

For young a student from a less affluent or stable background the messages are often clear: they are generally below the standards expected of them (within narrow criteria), they alone are responsible for lifting their achievement (often overwhelming) and if they don't wear their secondhand uniform properly or have a shave then they risk being excluded.

I wonder if the school or society would disintegrate if the student that sparked this post had been able to express concern about the school rule to be clean shaven to his student council and the rule had been removed. If this had occurred the young man in question would probably have felt that his concerns about a nonsensical rule had been heard, his views respected and he probably would be still studying in his school with a greater sense of self worth and confidence. He may even decide to exercise his vote because of his positive experience of a democratic system that works for everyone.

Unknown said…
Great blog Dave, yes you were lucky in your experience of school, and TG for your fair Principal, I was at a co-ed in the 70's with a strict uniform code that I could not quite meet, and often got detentions for wrong earrings, nail polish and wrong colour stockings and other crimes, haha not, so thought the adults were stupid and to be feared that cared about such things. Did not do much for my education as we were lucky to get a seat in a book in the baby boomers college of 2,000. Oh to see it still going on in schools I have worked in is ridiculous and a put down for students individuality, natural for teens to have re:Skinners theory on human development from memory. Also agree with having student reps from all levels as the older students have different priorities after being inculcated in their institution, and are no longer objective, and focused on their escape. The same with prize giving to same students over and over, how unencouraging, and Yes, having adults only focused on exam achievements does not make an education for life. Hope Chris Hipkins reads this Dave as our Education system needs an overhaul to stop so many students falling into negative traps about a system they are forced to participate in by the govt and law.
September 25, 2018 at 11:46 AM