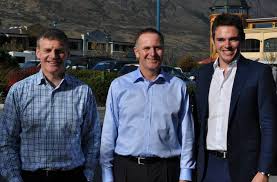 The illegal taping of a long-serving and widely respected employee by MP Todd Barclay has revealed much about the National Party's true character. What makes this latest revelation most concerning is the fact that good, honest, grass roots stalwarts of the party have been callously sacrificed with such little regard. This story has been well covered by Newsroom journalists and I think it deserves more than a passing mention.

Much has already been written about the National Party's underhand tactics. Nicky Hager exposed the use of the Exclusive Brethren to discredit rival parties in The Hollow Men (2006) and then in Dirty Politics (2014), where the use of shock jock bloggers to take out rivals was revealed. Although shocking and factual in content (Hager has never been successfully challenged about the accuracy of his work), neither book has really seriously impacted on National's vote. Many people see elections as a battle between political tribes and dirty tactics has been part of process for many years (even before Muldoon and his dancing cossacks).

The New Zealand people are generally seen as good natured and humble, but underneath that veneer we are also highly competitive and determined. Bullying is also unfortunately part of our national character, it is rife in our workplaces and schools. We are second worst in the developed world for bullying in both. When bullying is such a pervasive part of our culture many see bullies as just being tough and robust and those who are bullied as weak. This is partly why we vote for "strong" leaders and why beneficiaries, and those who struggle, are so easily dismissed as weak people who just need to toughen up, and sort themselves out (just listen to talk back radio and read social media comments).

For many years I worked as a volunteer within an education union to provide support for workers having employment difficulties. A good amount of my time was taken up supporting victims of bullying. I understood through a lawyer, supporting one case, that much of his workload related to workplace bullying within the education and health sectors. While it is shocking that occupations centred around caring should have such behaviour as common, one must remember that both sectors are large employers and would just be reflecting work cultures elsewhere. I have heard far more shocking stories of other employers in the private sector doing far worse than I had dealt with.

Todd Barclay was elected to a safe seat where some joke that a sheep dog could win the electorate if it was selected as the National Party candidate, such is the size of the majority. Barclay once worked for tobacco company Philip Morris and at one election meeting I attended, he was questioned about the morality of doing so. The audience was shocked when Barclay shouted down the questioner and refused to give a direct answer, his arrogance and volatility was revealed at that point (I don't accept his youth as an excuse).

Glenys Dickson was a very well respected employee, serving Parliament and MP Bill English as an electorate agent in Gore for 17 years. She was known to be principled and caring and did much to help those in the electorate, no matter what their political leanings or backgrounds. She was a strong supporter of the Blue Greens and cared deeply about the declining quality of the Mataura River. The fact that Glenys was subjected to shouting and regular dressing downs by the new MP shows extreme arrogance on his part and a lack of respect for someone who knew much more about the electorate that he was supposed to serve than he did. The secret taping of her conversations on a dictaphone was an illegal offence and should have resulted in a criminal conviction. Barclay abused his position as an MP by refusing to cooperate with the police which resulted in the case being closed through lack of evidence.

Even after the large financial settlement, to buy Dickson's confidentiality, she was still subjected to bullying from Barclay's team. She relates in an interview that someone rang to warn her that she would not be welcome at Todd's 2017 selection meeting. To ensure that she would stay away, the caller ended with a sinister reference to her son's partner (a "pretty little thing"), implying a threat of harm.

The taping of conversations and Barclay's general behaviour was known throughout the hierarchy of the Party and part of Dickson's settlement was paid from the Prime Minister's own fund. If the Party had any scruples, or moral backbone, it would have got Barclay to own up, apologise and some effort would be have been made to manage him and change his behaviour. The fact that a long serving employee was so callously sacrificed to shut things down says much about the real ethical baselines for National. Instead of being seen as a risk to the party, Barclay is often promoted in Parliament with his frequent use for asking patsy questions. The Party clearly sees him and his attributes as worthy of support.

The point of this post isn't just to expose this case and Barclay's dishonesty (he still denies his behaviour in public) but to call for an end to bullying behaviour at high level. If we are to change our current standing as the second worst in the developed world for bullying behaviour, then we must begin at the top. This affair cannot be swept under the carpet to be forgotten yet again. We do not want Barclay, or others like him, to hold positions of power and influence if they have such little regard for appropriate behaviour or respect for others.

This should be seen as a test for Bill English and a test for all of us. If we want New Zealand to be regarded internationally as a country that is honest and fair, and put an end to bullying, then we must make a stand. If we want a caring, ethical and responsible Government we must elect candidates and parties with those qualities, and condemn any who refuse to comply to those reasonable expectations.

POSTSCRIPT: What gives me some hope is that the grass roots of the National Party are wanting the police to reopen the case and I do hope that they look at the way their own leadership has behaved too. Perhaps some may even consider switching their support to another, more principled party.

POST POSTSCRIPT: Barclay has resigned but only after determinedly lying until the growing evidence otherwise forced him to retract and then step down. He is still not apologising for his actions and insisting on calling it an employment dispute when the crux of the issue is his illegal recording. The settlement was to stop his mistake from being publicly known. This does not remove or account for Barclays inferred allegations and behaviour towards Gleny's Dickson and there should be an investigation by the Privacy Commissioner around this.

Our MPs need to be accountable for their actions and the Party Leadership should be ensuring new MPs are properly informed of their responsibilities and made to face up for their mistakes. The questions that continue to swirl around this story throw much doubt about the standards expected of National MPs, presumably nothing around ethics and the bottom lines appear to be around being "pretty legal" and not getting caught.

POST POST POSTSCRIPT: The story continues...Barclay has ensured that he continues earning his taxpayer funded salary until after the election, some $80,000. If he was truly honourable he would have resigned immediately. His legacy is one of damaging the lives of long serving party members with slanderous comments and lies.  However, at 27, after working for a tobacco company and as an MP, he can spend more time in his $750,000 Arrowtown house. I bet all the service workers in Queenstown being forced to live 8 people in one room, at great expense, were not even aware he was their MP and he clearly doesn't know them.