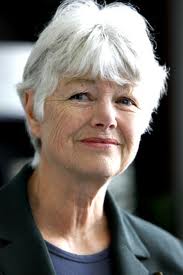 I wrote the following after attending Jeanette's presentation in Invercargill last night, hosted by Forest and Bird and the Coal Action Network of Aotearoa:

Jeanette Fitzsimons has retired from her parliamentary position and leadership of the Green Party and after decades of fighting for the environment one would think she deserves a well earned break, however, Jeanette is not the sort of person to rest when there is important work to be done. She began her presentation by patiently explaining the real consequences of climate change and said that most of us in the room won't be around when the full enormity hits "but you will" she said to a young girl sitting shyly beside her mother. What drives Jeanette and compels her to continue fighting is the possibility we can leave a world worth passing on to following generations.

The single most barrier to maintaining a stable planet is carbon emissions, through the continued use of fossil fuels, and the proposed lignite mining in Southland will be the largest new project that will contribute to that problem. Lignite is already being mined in the area to support the huge Fonterra dairy factory in Edendale and Jeanette struggled to understand  how Fonterra can promote our milk as coming from a clean green environment yet power the processing with one of the dirtiest fuels in existence.

Lignite is high in moisture, has a very low energy content,  produces large amounts of ash, is uneconomic to transport in its natural state and releases huge amounts of carbon dioxide when burned. All in all it is a low grade, highly inefficient fuel. Jan Wright, our current Commissioner for the Environment, recently wrote a very conservative report on further mining of lignite and concluded it was best to leave it in the ground. Yet this government's   prematurely released Energy Strategy clearly favours fossil fuels over environmentally sustainable sources.

Three separate companies are looking to mine in Southland; our own SOE, Solid Energy, L&M a company whose ownership can only be traced to Belize, and Greywolf, a subsidiary of the huge Chinese energy company Qinghua. The likely destination for the bulk of the briquettes, urea and diesel (that will be potentially produced) will go to China to fuel their rapidly expanding economy. A worrying element of allowing large international companies access to our resources is that our current trade agreements lack robust protections and if we decide, down the track, that we want to limit access then we could have costly litigation to deal with.

New Zealand will gain some royalties, a few jobs (most specialist positions tend to be internationally sourced), a dirty great hole and the general environmental effects that are still to be quantified. There are very few wealthy, thriving communities situated close to mining operations and the potential damage to related aquifers and local infrastructures (roading etc) hasn't been fully established. The science behind much of what Solid Energy claims are environmental safe guards are still unclear, especially the capture and storage of carbon emissions (carbon sequestration). The proposed lignite recovery will release up to 17 million tonnes of carbon emissions into the atmosphere annually and even if the majority is released in China, the original source is still New Zealand and we have the moral responsibility of allowing it to happen.

Environment Southland and the Gore District Council need to seek the best advice possible in deciding where the most sustainable future lies for our communities and environment. In supporting the mining of lignite they need to think beyond the initial financial benefits and look at where we will be placed in ten or twenty years time because of that investment. They should also look at other alternatives for economic sustainability and the value of the resources we would lose because of the mining; the rich top soil, the clean aquifers and the visual beauty of the area. They should look at local communities, both here and internationally that exist post mining to see how much better off they are to live beside an open cast mine and the remains of an abandoned industry. Solid Energy's PR machine is driven by commercial imperatives and alternative, equally valid views, will not necessarily have the same slick delivery but still need to be heard.

There are times in our history when we reach important crossroads, where decisions made can have binding long term consequences for future generations, this is one of those times!