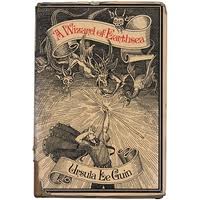 I remember reading reading Ursula Le Guin's book A Wizard of Earthsea as a child and being strongly impressed by the underlying moral theme running through it.  Like the Harry Potter books, that it predates by almost 40 years, the story involves the education and development of a talented young wizard (Ged) who has to endure some difficult situations before finally confronting a dark and evil presence. Coincidentally, both central characters had their key mentor perish in their defense.

Despite the similarities between the two stories there is a key difference between Rowling's view on magic and Le Guin's. For Harry Potter, magic was an exciting and useful tool that was wielded with enthusiasm and could be used for fun or as a weapon. The education that young Ged received emphasized the responsibility and thought required in using any spell, large or small. Magic, in Le Guin's vision, was a direct intrusion on the natural order of things and should never be used without an appreciation of its direct or indirect consequences. The struggles Ged experiences are because of one impulsive act of magic that had an unexpected and catastrophic outcome.

The National Government can be likened to a young and impulsive wizard, they can wave their governing wand and instantly create change with no thought to the consequences, slash a budget here, introduce legislation under urgency there. They have the wand and they'll use it how they want, thank you!  But they don't see the consequences; the families struggling on food parcels because they can't access the required budget advice necessary to gain financial support; the well staffed early childhood centre that had to let go two teachers because of a cut in funding; The young widow labeled as a bludger if she chooses to stay at home to look after her two preschool children....

Power comes with responsibility and this National Government's narrow view of the world and rushed, ideological decision making could easily leave a trail of destruction equal to an earthquake in its long term consequences.