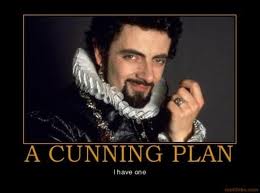 Q&A this morning devoted its programme to innovation and they had collected together a number of academics and successful entrepreneurs to discuss what was required to really develop a strong economic future for New Zealand.

Some common themes came through strongly:

Our current Government have done some serious thinking and based on these themes they have developed a cunning plan that is so revolutionary that we have failed to see its true brilliance. New Zealanders are naturally resilient and innovative and we have come to where we are because of our number eight wire and "get on with it" mentality. We actually do better with less so the government has embarked on an ambitious underinvestment strategy.

They have placed the education portfolio with their least capable Minister (more cunning underinvestment). This Minister is able to ignore all professional advice and truly knock the guts of the Primary education system. By removing all advisors from curricula like technology and science and forcing an unworkable assessment system on schools it will force teachers to be more innovative and independent.

Cutting funding for adult education was obviously done to force unemployed adults into becoming independent learners and not funding early childhood centres and kindergartens that have fully qualified staff was such a clever idea the reason behind it is beyond me. The fact that we have amongst the best early childhood and primary education systems in the world on one of the lowest levels of investment in the OECD means that reducing funding must be a successful way of producing quality. The complaining families and teaching profession just don't appreciate that lack of investment is investment.

This government knows that desperation drives creative energy, so forcibly keeping our median income as low as $28,000 we will have a population of desperate but creative people who will need to develop innovative ideas just to survive. It is amazing what meals some people can produce from the humble potato and we now have budding entrepreneurs taking advantage of the booming market for secondhand clothing.

Wayne Mapp was quick to correct Paul Holmes' comment that New Zealand spends 1% of GDP on research and development when the rest of the world spends 6%. We actually now devote 1.3% on R+D and he claims the extra .3 is seeing some amazing developments, we are obviously well on the way to making our mark on the world in this area. While concerned that the extra .3% may be a little too rash our strategy of underinvestment is seeing good results.

To divert funds directly out of property investment through a capital gains tax would seriously damage the underinvestment strategy the government is pursuing as this would shift too much money into productive sectors and would stifle any innovation that non-investment brings.

National is keen to see us again become world leaders in public transport and rail. New Zealand led the world with its ambitious development of rail transport 100 years ago when money was tight and the skilled workforce was developed from nothing. By forcing the closure of our rail workshops the Government hopes that by starting from nothing again we can use the same pioneer principles to develop our rail capacity, if we start with a capable workforce we just won't succeed.

The government has taken on board the need for a global approach to economic growth and has embarked on another cunning plan to achieve this. They have taken the term "global buy in" literally and have decided to sell off state assets and out source as much as possible. New Zealanders have over-invested in ourselves and we have become too comfortable with having control of our strategic assests. Real innovation will come when we have very little sovereignty over our own country and we will really have to look outside the square to survive.

Finally, having a long term vision that extends even beyond ten years is something that this government really appreciates. It has recognized, quite rightly, that this is also something it has failed to do in the past (remember leaking buildings...) and it needs to out source the development of such visions. Most businesses and corporates are very good at future planning to ensure ongoing profitability so market forces will lead our country into the future, it does not make sense to trust our government with such an  important role.

National's cunning plan is well underway and I think most of us see the real benefits it has provided us, which is why more and more people are looking to this vision instead.

robertguyton said…
Q&A certainly got your dander up Dave!
Mapp looked silly when asked about Capital gains Tax. Just silly! Didn't seem to have the heart even to argue against it.
July 10, 2011 at 2:13 PM

bsprout said…
We just need to question them more and demand the evidence and research that supports their actions in more public forums. It is interesting that when business leaders say silly things they are immediately removed, but when our political leaders say silly things other rules seem to apply. Anne Tolley is even praised for managing to hang on to her portfolio despite her obvious lack of understanding. National are not royalty, they have no divine right to rule and we shouldn't tolerate them as if they do!
July 10, 2011 at 2:40 PM

James said…
I've just read "Democracy and Other Neoliberal Fantasies" by Jodi Dean. She says that capitalism now works on the circulation of comment among people out of power, to keep them busy so people with power can ignore them.

I think asset sales will stop when Mercury Energy runs out of customers.