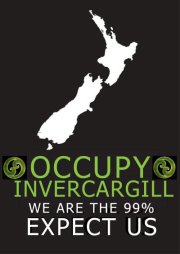 I visited Invercargill's version of this worldwide movement and talked with a small group of enthusiastic young people who are making a stand for what they believe in. I was pleased to hear that rather than chasing them off, our civic leaders are respecting the peaceable nature of their protest and allowing them to stay. Mayor Tim has offered his support by returning the power supply and providing a toilet.

There is more enthusiasm than organisation with the group, but I was impressed with their openness and willingness to listen to different views. I spent an hour listening, presenting Green thinking and discussing world issues. Conspiracy theories dominate much of their world views, especially around banking and money control. I can see how they may form these views, especially after the New Scientist article (hat tip, Robert Winter) that highlighted the research by three systems theorists from the Swiss Federal Institute of Technology (Zurich). They found that 1% of companies controlled 40% of the entire transnational corporate network and most were financial institutions. The top 20 included Barclays Bank, JPMorgan Chase & Co and The Goldman Sachs Group.


The difference in thinking between myself and many of the occupation group is probably around the intent behind these powerful corporates and reserve banks. I do not think there is a sinister conspiracy but more a culture of power and greed, with little thought to the consequences of their actions on our wider society. The recent economic collapse of many financial institutions reveals greed has been the more likely influence on their thinking rather than a sinister plan of world domination.


I was concerned that some in the occupation group were so disillusioned with politics and "the establishment" that they had decided not to vote. There is little one can do to create real political change if there is total disengagement and while our political system has its flaws, it isn't totally dysfunctional either. A change of government could easily result in a major shift in thinking and a reversal of much that is currently threatening a sustainable future. Party voting Green would go a long way to enabling this positive change to happen.

Robert Winter said…
I think we both found the Zurich work from different sources - I promise it was not plagiarism.
October 22, 2011 at 8:57 AM

bsprout said…
You're right that the Zurich work has been widely disseminated, Robert, but I owe you an apology because you were my original source. If anyone could be accused of plagiarism it should be me. I should have acknowledged you and will rectify that omission immediately.
October 22, 2011 at 9:52 AM