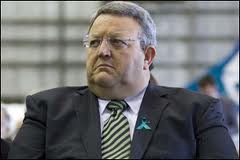 Julie Anne Genter continues to grill Gerry Brownlee about the evidence he has used to determine National's $12 billion dollar investment into the Roads of National Significance (RONS). Yesterday there was another dismal effort from Brownlee, who could produce no research or evidence to prove that the roads were the best value solution for our transport needs. As far as he was concerned we need them because there is some congestion and the only evidence necessary was the electoral returns in 2011. When Genter called for a point of order regarding the fact that Brownlee had not provided specific evidence, the Speaker (with a rueful smile) explained that he didn't think she would get a better answer other than the Minister believed the motorways were a good idea and that was what he was basing his decision on. He invited the Minister to respond to the point of order but got no further explanation.

In the process of asking her questions, Genter provided a range of evidence that would ring alarm bells for anyone other than Gerry Brownlee. The New Zealand Traffic Agency (NZTA) monitors traffic volumes and their graph (Pg 4) shows minimal growth in traffic since 2004. The price of fuel continues to rise and although there is ample evidence that this will be a continuing reality. Brownlee's response regarding the price of fuel was bizarre:
"...the relative price of petrol to decisions people make about transport modes is inelastic."
Surely the stagnant traffic growth and the increased demand for public transport suggests otherwise?

Possibly the most frightening evidence that Genter provided was the fact that the collapse of the Greek economy was somewhat due to their borrowing to build motorways. Brownlee attempted to bluff his way out of the worrying comparison by claiming that it was extraordinary spending on "large, monolithic" rail systems that was the country's downfall. Genter, never one to not do her research, tabled a report from the European Commission on Greece's transport investment priorities that showed that the vast majority of transport spending was on motorways. Brownlee's claim that it was rail that dominated Greece's spending was just another example of the apparent (but unsubstantiated) facts he plucks from nowhere, and yet is reported as fact by lazy journalists. Greece's Egnatia Odos (modern road) project has been described as  "...the most ambitious and expensive public project ever to have taken place in modern Greece."

If this was a boxing match Brownlee would have thrown numerous loose punches, received several standing counts and the match would have been concluded with a knockout. Brownlee may be considered a political heavyweight but Genter was better prepared and punched with devastating accuracy.

Anonymous said…
I watched it on Utube and it certainly felt that the Hon Brownley would have lost the case if that had been a law court, when will the "evidence" start to count!!!
August 23, 2012 at 7:14 PM

Galeandra said…
Brownlee may be considered a political heavyweight...

bsprout said…
You're right, Galeandra, I don't make a habit of such comments but Brownlee's behaviour is so appalling he deserves it. I especially hate the way he makes things up to win arguments, total fabrications and yet he is generally believed.

Armchair Critic said…
His performance yesterday, in Question One, was pretty bad. In terms of people believing total fabrications, it seems that Jane Clifton saw through it.