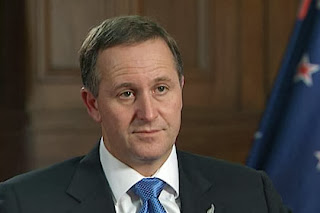 It would have been nice to have at least 50% of eligible voters participate in the referendum but given the involvement in local body elections (an average of about 44%), achieving a similar turnout in the preliminary count wasn't too bad. The Government also did their best to time it when people would be least bothered, just before Christmas and near the end of the year. Key and English also claimed that they would ignore the result anyway, so many thought there was no point in making the effort and especially when most of the assets have already been sold.

Down in the six most southern electorates our results made interesting reading. At 46.5% the average turnout was higher than the national average and in two electorates over 50% of voters took part (Dunedin South 53.6% and Waitaki 51.9%).

Three of the electorates are held by National MPs and yet the average 'no' vote was just short of 75%, so three quarters of all those who voted were against asset sales. The strongest no vote came from Te Tai Tonga (the most southern Maori seat), which had 91% voting no. Dunedin North had 80% voting no and the lowest no vote was in Bill English's electorate, Clutha Southland, which recorded 61%.

Nationally it was interesting to note that the electorates that were the most affluent, and more likely to benefit from the selling of shares had the strongest yes votes. Epsom had the highest level of support for the policy at 54.6% (still not a strong mandate) and the seven Maori seats, which probably contain those on the lowest incomes averaged 6% support. John Key's own electorate of Helensville could only muster 47.7% support.

John Key and his Government are working extremely hard to spin the result, claiming that only 1/4 of eligible voters voted no to the asset sale policy, with three quarters not engaging or voting no. This is very clever, but one could also say only 1/12 bothered to vote in support, hardly a ringing endorsement. It is also a big stretch of the imagination to suggest that those who didn't vote were either ambivalent or supportive. Many I have spoken to recently told me that they weren't bothering to participate because the Government would ignore the result anyway. The referendum still reflected most polls conducted on the asset sales, such as the October Horizon poll. The result also matched the anecdotal responses I received when collecting signatures for the petition.

It is very clear to me that at the very least, two thirds of New Zealanders are opposed to the asset sales and the Government's stubborn determination to continue with the sale of Genesis Energy shares is extreme arrogance. They have only raised a fraction of the money that they had originally claimed, with Treasury estimating that it will be around $2 billion less. The promise of shares going to "mum and dad" investors also proved to be a fantasy when less than 2% of New Zealanders were able to take up the offers. The Government claimed that the cost of the sales wouldn't be more than 2% of the revenue and yet they ended up costing a quarter of a million, around three times more (the $9 million spent on the referendum is chicken feed in comparison).

No matter what Key tries to spin, this referendum result clearly shows that this Government is out of touch with most New Zealanders. The asset sales were one of the most important policy platforms of 2011, but they will be joining all the other underwhelming achievements of National's second term: Novopay, child poverty, Solid Energy, education achievement, motorway construction, job creation…