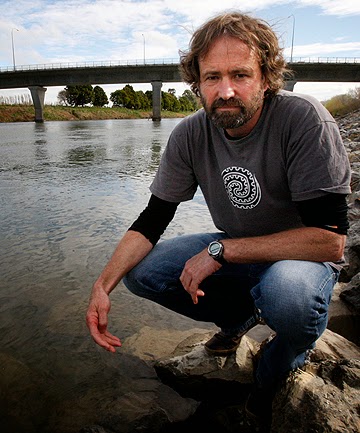 Mike Joy was speaking in Invercargill last night to an audience of around 80 people. It was a very mixed crowd with local body councillors, environmentalists and farmers represented.

Mike has been subjected to some heavy attacks from the Prime Minister and business leaders for being outspoken about the state of our environment. Despite the fact that he has won awards for the significance of his work, Mike will probably have difficulty attracting government funding for further research as he is considered to be an impediment to the growth of dairy farming. 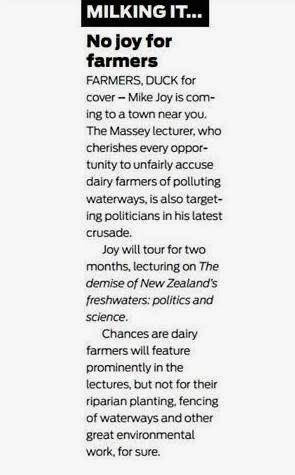 The content of his talk was largely familiar to me but his presentation was very compelling, the science was solid and the environmental concerns were starkly presented: 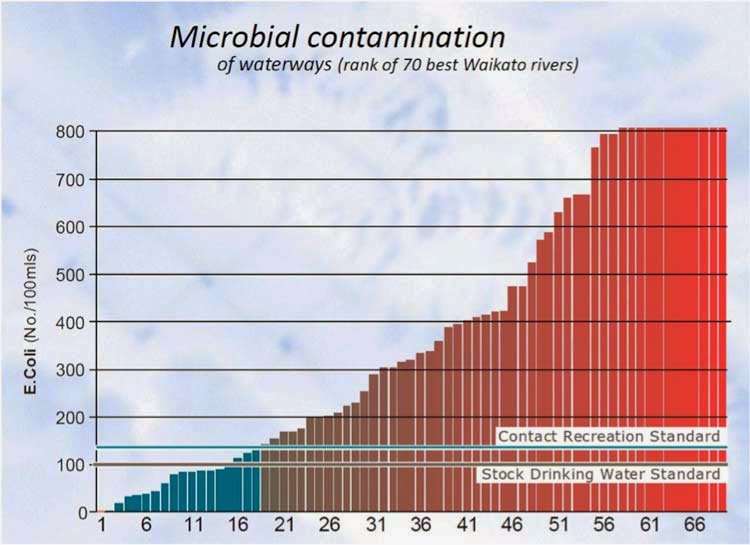 Our problems aren't decreasing or even static, the levels of pollution and the threats to our environment are actually steadily increasing: 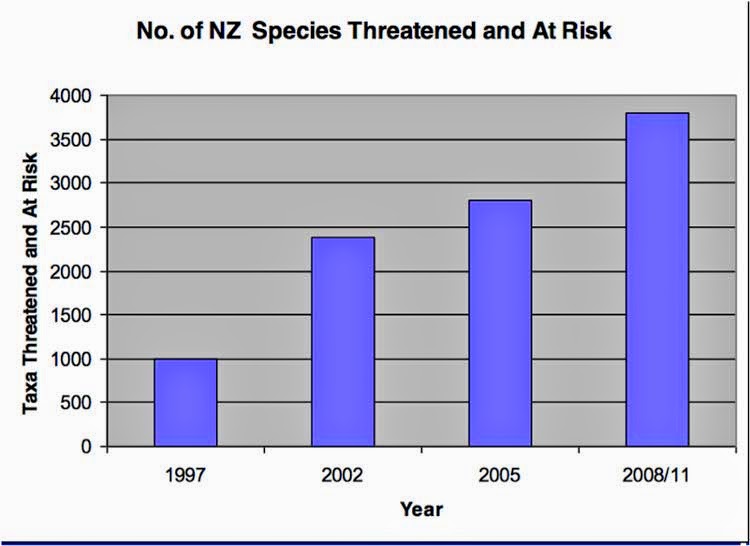 Mike talked about the politicization of the science that is publicly communicated. Much is industry funded, which generally excludes anything that may have a negative impact on the industry concerned. The expansion and intensification of dairying is seen by the National led Government as vital to the economy and, to enable the industry to continue to grow, environmental degradation is seen as necessary collateral damage.

The Government has decided to stop any substantial independent environmental reporting to ensure that the enormity of the degradation is not widely known and they try to control the information that reaches the public domain.  The last full report was from 2007 (over six years ago) and chapter 13 was initially cut because it stated that the largest pressure on our land, freshwater, coastal oceans and atmosphere was through the intensive development of our pastoral land. It was only because the Green Party discovered the suppression, and published it, that it become publicly known. Although the Government has introduced three yearly environment reporting, it will only be through the Ministry of the Environment (under their direction) and the independent Environment Commissioner has been deliberately excluded from the process.

The other huge concern about the intensification of our farms is that the current levels of production cannot be sustained through just using our own resources. We have to import large amounts of fertilizer, especially phosphate, and we are the largest importer of palm kernel (1.8 million tonnes for this year) because we cannot produce enough grass to feed our rapidly expanding herds. New Zealand annually imports around one million tonnes of Western Sahara phosphate and most phosphate contains cadmium, an extremely toxic heavy metal.

Repeated applications of super phosphate just increases the levels of cadmium in our agricultural soils and in many areas farms could never be converted into urban environments because the ground would be considered too toxic for human habitation. Already the offal from stock grazing on land with high levels of cadmium has to be disposed of because of its toxicity. A conservative estimate of the impact on the Waikato region predicts that the average concentration of cadmium in dairy soils will go beyond the recommended guidelines in 16 years.

While the Government constantly talks about needing to balance economic growth with environmental management it appears the balance has been seriously tipped in favour of dirty economic growth for some time. Opening up a few marine reserves will barely scratch the surface of our environmental needs (and they won't even save our Maui dolphins).

Mike Joy eloquently compared the Government's environmental stewardship to driving a car when the oil warning light starts flashing and as a solution they have just disconnected the light.

Unknown said…
This exactly mirrors my views on the situation. We are creating a dire environmental crisis.
June 15, 2014 at 11:26 PM

melulater said…
Knowingly farming in this way is basically carrying on as though everything is normal in the house next door when someone is suffering domestic abuse and you can hear it.
To poison our land like that is knee capping our future generations from working the land and our country's continued economic security.
But then again, National only cares about the here and now, lining their own pockets and making sure they have posted their measly surplus!
June 15, 2014 at 11:38 PM