Wetlands are not Wastelands 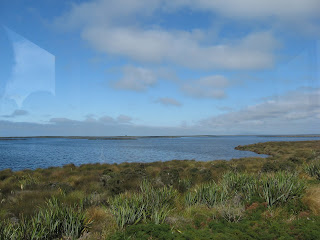 This is an image from the viewing shelter on the edge of the Waituna Lagoon at the heart of the Awarua Wetlands. It is one of the largest remaining wetland complexes in New Zealand and is nationally and internationally regarded as important for wildlife, especially trans-equatorial migratory birds. Over 80 bird species have ben identified in the area, 65 of which are dependent on this type of environment for all or part of their lives.

In 2007 the Green Party managed to wrangle $8.8 million from the budget (The Arawai Kākāriki project) for three significant wetland areas, with Awarua being the largest. This money has allowed for:

Despite all of this the ongoing scientific research has detected a negative change in the quality of the water entering the wetland. Farmers in the immediate catchment have made huge changes to their practice and are operating well within regulated requirements yet it has been found it is not enough. The intensity of farming still allowed in the area and the wider catchment has meant that stronger measures are needed. Environment Southland recognize the problem but can not operate outside of the regulations they are bound by and DoC knows what is needed but can only make recommendations.
Federated Farmers are adamant that the viability of the farming industry must come before all else and want the science peer reviewed. Local farmers, who have made huge changes in practice and personal investment in improving environmental outcomes, have their livelihoods under threat. Southlanders have now accepted the wetlands as something worth saving and there is much public and media support for strong action. DoC has reached the limits of their capability, Environment Southland can make little more demands on landowners, the ball is now in the Government's court.
It will all come down to how genuine the National Party's Bluegreen iniative really is. I fear we will discover the blue becomes hugely dominant and the green pales into insignificance?

robertguyton said…
Or rather Dave, the 'bluegreen' will come to be synonymous with the deadly algae.
April 1, 2011 at 7:45 AM

Piwakawaka said…
having spent two days at the "Bluegreen" conference this year... i can assure you that a Bluegreen agenda is all about 'we like the environment, but ONLY if it provides tangible economic returns.'

When it comes to wetlands, they return significant economic benefits (as well as the obvious biodiversity benefits). E.g. Whangamarino wetland aided in protecting surrounding farmland for a 100-year flood in 1998, and saved the local authorities $5.2 million.
April 1, 2011 at 12:16 PM

bsprout said…
Piwakawaka-I'm afraid in the case of the Waituna, to save it will mean squeezing dairy profits, I don't hold to much hope.
April 1, 2011 at 12:39 PM

the Flaneur said…
Might talking of it as "squeezing profits" just guarantee massive oposition? Just sayin'...
April 2, 2011 at 12:31 PM

Unknown said…
the Flaneur-In talking to local farmers I have discovered that Federated Farmers now speaks for a minority of Farmers and many are embarrassed by their public pronouncements. The fault in many cases is in the legislation Councils have to work with, which doesn't have the required teeth to do the job.
April 2, 2011 at 6:25 PM