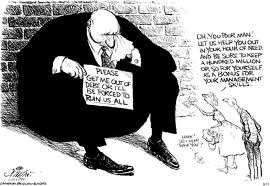 I am continually frustrated with how long it takes for this National led Government to react to areas of high need, whether it be dealing with the causes of child poverty or creating employment for our unemployed youth. The evidence has existed since they were first elected in 2008 and four years later we are beginning to see some belated action for things I would have thought needed urgency from the beginning. It is not as though this Government can't act with urgency, there are times when it has seen a need for quick decisions and immediate action. Warner Bros, Media Works, and Private Schools have all benefited from prompt and decisive support.

I did have difficulty understanding why Media Works should receive a $43 million dollar loan against the advice of the Ministry of Economic Development and yet our special needs schools are being closed due to financial constraints. Obviously Steven Joyce has a close relationship with Media Works (his past employer) and therefore has an in-depth understanding of their needs and concerns, yet there has been few attempts at meeting and consulting with the teaching profession or parents when education decisions are made. Media Works and Warner Bros would probably claim that they have a good relationship with this Government and that they have their needs and concerns are well understood, I wonder if the parents and teachers in Christchurch would say the same.

I would have thought that our Government should be working in the best interests of the people of New Zealand and what would be in the best long term interests of our country but it appears that the needs of overseas owned corporates take priority.

Media Works is owned by Iron Bridge Capital, an Australian Equity Firm and locally owned media could not understand why this company got support over them. While Media Works owns a number of FM frequencies that they don't use (and now getting the licenses for them subsidized),  local Access Radio Stations can't get FM licenses because they have all been captured by Media Works.

The Government's deal with Warner Bros saw them colluding with the film company and Peter Jackson in a media beat up that claimed that the local actors union was threatening the filming of the Hobbit. In fact this was a lie and a cover so that the Government could change employment conditions and immigration law. New Zealand actors do not have much job security and certainty of income and the government's willingness to make their conditions even more tenuous to support the film company's already considerable profits was unnecessary. Last year Warner Bros celebrated third quarter profits of $882 million, 57% up on the previous year and revenues of $7.07 billion. This is hardly a struggling company and yet through this National led government they were gifted $25.5 million in tax breaks and advertising subsidies. This Government was also willing to spy on a New Zealand resident in support of American film industry profits. Why couldn't the same $25 million be used to support our own film industry and our own workers within that industry?

Locally owned community radio, local actors and film workers, special needs children, damaged Christchurch communities and struggling families are of no real interest to this government. They do not appreciate their needs or are interested in finding out what they are. There is still this bizarre neoliberal view that if you feed the big boys well there will be lots of crumbs left for the workers underneath. In reality the more you feed something the fatter it gets and a lot of shit is produced and if you want a physical example of this analogy, go and look at your closest river.