Sage Advice For Saving Our Estuaries 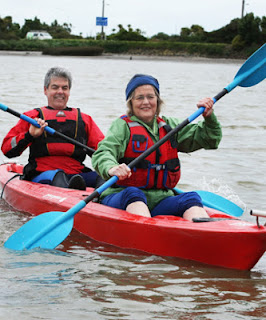 Russel Norman started the Dirty River Tours a few years ago to highlight the declining quality of our waterways. He visited the Mataura River in Southland a couple of years ago but his southern focus shifted from rivers to the Waituna Lagoon and wetland area when it was revealed that the bigger environmental catastrophes were occurring where the rivers ended.

Eugenie Sage has taken over Russel's role as the Green MP responsible for water issues and has started her own Dirty River Tour. She had decided to begin her tour in Southland and initially looked at the Oreti River until she became aware of a worrying report from Environment Southland regarding declining state of our estuaries.

The declining quality of our rivers and aquifers is a worrying reality and the infamous BBC interview with John Key, where our Prime Minister dismissed criticisms of our environmental record from respected scientist Mike Joy, revealed this Government's total reluctance to acknowledge the truth. It appears that while we are profiting hugely from the boom in dairying and the intensification of our farming, environmental concerns are largely being sidelined . The flaw in this approach is that while rivers may be improved at a later time the damage to estuaries, lakes and wetlands is not such an easy fix. Reducing the runoff of nutrients from farms would make an immediate difference to river quality but for environments where the flow ends, and we have still water, the nutrients and sediment settles and remains in the environment. The problem compounds over time and even when there are improved environmental controls at a later stage it can be too late for an estuary or a lake.

I have already posted on the importance of estuaries as a vital ecosystem and the fact that two of our largest Southland estuaries have reached a tipping point, environmentally, should be a serious wakeup call for our Government. Environment Southland should be commended for their recent focus on coastal areas and having good data to inform planning. If it wasn't for Environment Southland commissioning their estuary report the true extent of the spread of eutrophication would not have been known.

For all their efforts Environment Southland is hampered by the fact that they are required to implement their own water quality standards and every time they set limits they are being challenged by farmers and businesses that will suffer from the tighter environmental controls. This means that it is a slow and sometimes expensive process to embed new regulations and if other regions do not have the same level of controls farmers feel justifiably aggrieved. We desperately need national standards in water quality so that regional councils can enforce the standards without having every action contested and those effected by the tighter controls can see consistency across the country.

The Third Report of the Land and Water Forum contains some positive recommendations but still largely fails to provide real support for local authorities who bare  the brunt of water quality enforcement. Without national standards for water quality they will face ongoing enforcement challenges and introducing a commercial element into the use of water rights is also a concern.

We have all experienced increases in power charges through commercializing our power supply and the same will happen with water. Individuals could buy water rights beyond their needs and sell the rest at a profit. The price of water will increase if demand exceeds supply and the money will not be reinvested in maintaing quality and supply but will go to the pockets of those who control the rights. It would be far fairer to have a regional authority managing the distribution of water use in a sustainable way and charging a reasonable rate on usage that could then be reinvested in the management and protection of the water systems.

This National led Government have failed to understand that the security of our environment isn't dependent on a strong economy, it is the other way around. Our economy is dependent on a healthy environment! It is ironic that some of our most successful businesses and business people have already realized this simple truth in the latest Pure Advantage report and this Government would be well advised to read it. 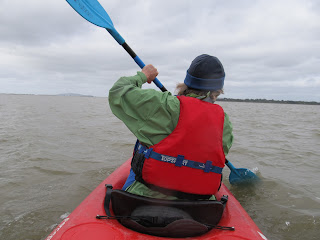 Eugenie Sage paddling into the New River Estuary, near Invercargill. 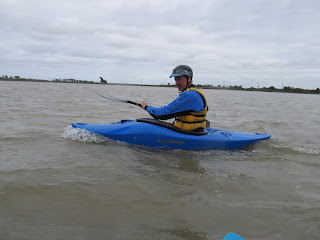 Maurice Rodway,  Southland manager for Fish and Game and Environment Southland Councillor pointing out areas of most concern.

Anonymous said…
Eugenie can work blind - no need to pick and choose. It is doubtful that there is a single estuary left in anything close to pristine condition, so she can go anywhere. She will be kayaking in Tauranga in January and our problem is deciding which one is worst, not which one is polluted.
November 22, 2012 at 7:52 AM

IanM said…
I obviously don't understand this software because it will only allow me to be anonymous, but I am not a nony mouse. I'm Ian McLean.
November 22, 2012 at 7:55 AM

Anonymous said…
Hi BSprout, I used your phrase, "the security of our environment isn't dependent on a strong economy, it is the other way around." in a public notice for the Buller District Council on development for Westport. I felt it wasn't appropriate to acknowledge the author on the public notice board - here is the acknowledgement - hope this suffices, in an age of accountability for plagiarism,
Frida
November 22, 2012 at 11:37 AM

bsprout said…
Ian, I think you have to register as a blogger with google, even if you don't run a blog to have your name automatically appear. Many just have their name on the bottom of their comment and accept the anonymous at the top.

We had the same problem with choosing an estuary as all of ours air suffering too. We decided on the one closest to the biggest population for publicity's sake, it was accessible to media and more people had a connection with it. Another estuary was suffering more than the one we focussed on.

Frida, I'm just flattered that you found my phrase useful. I often quote Russel Norman's "no water no milk, no environment no economy."
November 22, 2012 at 12:15 PM