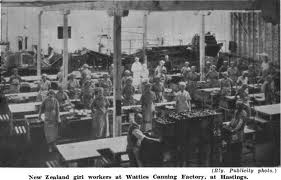 In 1914 New Zealand was the richest country in the world in terms of GDP per capita and we were still ranked third in 1960. According to the IMF we are now 25th, just behind Italy, and the United Nations make us 29th, below New Caledonia. While I accept that the international markets we have had to compete within have changed (the EEC, trade protectionism and the growth of multinational monopolies), I do think there are internal factors that have caused a drop in productivity and competitiveness. If we look at only one aspect, New Zealand's workforce, we have been experiencing dropping productivity (around .3% annually) since 2006. While the Government claims that the global recession and the Christchurch earthquake are responsible for our lack of productivity and economic success, I think this is a copout.

There are seven factors that I think have a large impact on our low levels of productivity:

New Zealand is increasingly becoming a low wage economy, median weekly earnings for all wage and salary earners is around $42,000 a year and this means half of our workers earn this or less. We have a growing number of part-time workers who are looking for full-time work and a drive from employers to have a higher level of casualization. Workers have also not received wage increases for some time that reflects any increases in productivity. The real value of wages is falling as costs such as housing and power are rising faster than inflation. Although the Port of Auckland workers had dramatically lifted their output they were rewarded with reduced employment conditions and enforced casualistion. Working harder in New Zealand does not generally relate to increases in income. New Zealand wages are around 30% less than Australia and the level of union membership and collective agreements is also much less.

Many jobs that used to be regarded as full-time are being casualised and this reduces the employers responsibility to provide employment certainty and normal rights such as sick leave and redundancy pay. Workers who used to be wage earners are now contract workers and although their incomes may be low they are often then required to pay for their training and the costs of transport and tools. Many employers have the luxury of a workforce that they have little responsibility for and can turn on and off the supply as they wish. However, this also means that there is little loyalty to the employer and a lower level of collegial support within the workforce as they have to compete against each other for jobs. Our health and safety record is now three times worse than the average in the OECD and we have around 1000 premature deaths annually from work related illness and 100 fatal injuries. Pike River was an extreme example of the disregard we have for worker health and safety.

We are seeing the wealthy of New Zealand being rewarded with tax cuts and huge salaries for CEOs appears to be accepted practice. The richest New Zealanders saw a 20% increase in their wealth last year and the growth of income inequity is more pronounced in New Zealand than most other countries in the world. In many jobs there little incentive for workers to seek promotions as the minimal increase in remuneration involved is not seen as enough for the increased workload or responsibility. I know this is true in teaching and much of the public sector and the CEO of Fonterra recently received a 41% increase in salary while a wage freeze was in force for other management positions.

There is a scarcity of high paying, well qualified jobs in New Zealand. 25% of our university graduates head overseas to get jobs and those that remained earned an average of $29,000 in 2010. 15% of our 20-24 year old graduates are unemployed and many of those who are, are in jobs that they are over qualified for. The Government has cut almost 4,000 well qualified jobs from the public sector.

It has been estimated that up to 20,000 jobs have been lost from the manufacturing sector in New Zealand since 2008. Our high dollar has put the squeeze on exporters and many New Zealand businesses like Fisher and Pykel are outsourcing production and are being bought out by overseas companies. The Government itself has not supported our skilled workforce and the outsourcing of rail engines and rolling stock saw the closure of the Hillside workshop that once employed 1200 workers.

Many of our best scientists and researchers are leaving New Zealand because of an under-funding of research and development that places us well behind the majority in the OECD.  Professor Jacqueline Rowarth is adamant that our agricultural sector will only thrive through greater investment in R+D and claims our level of investment in this area ranks us with Mexico.

When jobs are dramatically cut from the state sector it implies that those jobs were not necessary in the first place and often diminishes the status of those that remain. We even have the situation where jobs that were once considered highly responsible positions are being filled by people with no relevant qualifications or experience. The introduction of Charter Schools that allows non qualified teachers to front classrooms and the government's lowered expectation of qualified teachers in Early Childhood (from 100% to 80%) has seen a huge drop in status  for the teaching profession. Even the job of delivering post has had lowered status to the extent that Queenstown discovered around 20,000 undelivered items due to little appreciation of the responsibilities and ethical standards necessary for the role. Few rest homes in New Zealand manage to achieve even basic standards of care, largely due to the fact that rest home operators improve profit margins by keeping wages low. Those who work in caregiving jobs are amongst the lowest paid workers despite the experience and skill needed to do the job well. It appears that the Novapay debacle may not have happened if more qualified people with a deeper understanding of the sector had been employed to do the work. I wonder how much those who were doing the data entry got paid?

If we wanted to see a stronger economy we need a workforce that is well qualified and well supported by technology and research. A worker would be more productive and take pride in their work when what they do is valued and they are provided with safe environments and are well remunerated. Workers are more likely to be productive when they work collaboratively and feel a loyalty to their employer. Any worker will invest more in their work if they think it has long term prospects and has job security. Finally workers are more likely to concentrate and be more productive when their wages enable them to live comfortably in good homes and have financial security. All this seems like common sense to me but perhaps John Key and Bill English know something I don't.