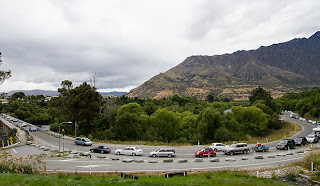 A number of letters to the Southland Times have highlighted the frustration in the lack of regional balance in road funding and I decided to throw in my thoughts on the matter. This is something I have posted on before but is an ongoing issue. Considering that the Minister for Finance and the Assistant Speaker are our local MPs one would expect a greater level of advocacy on our behalf.

I share the frustration of the many writers to this paper about the appalling lack of research and planning that is behind the current expenditure on New Zealand Roads.

This Government has committed to spending around $12 billion on 'Roads of National Significance' based on little more than the belief that they are a good idea. Most of these mainly North Island motorways do not even pass basic cost benefit analysis and are being pushed ahead despite traffic volumes stagnating (and will obviously continue to do so after the proposed increase in petrol tax).

Southland earns about 11% of our nation's export income despite having only 2% of the population. Surely it is commonsense to ensure that money spent on road infrastructure supports our economy rather than just keeping traffic flowing in major cities where public transport has been underfunded for decades.

When we have milk tankers rolling on poorly maintained roads and traffic held up for over an hour near our preeminent tourist resort there are serious economic consequences.

I would hope our local MPs are advocating strongly on our behalf to ensure that these issues are addressed in a timely fashion, however I do question their commitment to our region when there was no National Party representation at the economic debate held last month.

Let's make 2013 the year that Southland gets a fairer share of the economic pie that we generously contribute to.

Evergreen said…
"... and traffic held up for over an hour near our preeminent tourist resort there are serious economic consequences."

bsprout said…
Evergreen, are you saying that we shouldn't support a new bridge at Frankton because it is no different from the Holiday Highway? If so I think there is a clear difference between replacing an historic one lane bridge causing disruption on a major tourist route that will cost $5-20 million to the $1.7 billion that will be spent on the 'Holiday Highway'.

There will be definite economic benefits from the Frankton bridge construction while the Holiday Highway fails cost benefit analysis:

Evergreen said…
The people who buy our Holiday Highway line do not care about the economics, it is all about the placards, same as Asset Sales. But it makes it difficult if we have to try and explain ourselves, and explaining is losing, when we are shown to be inconsistent with our opposition to roading expenditure. Next thing we are backed into a corner over printing money, not by the people who will vote for us, but by some loud mouth in front of a group who then ridicule us. We have to stay firm on these things.
January 4, 2013 at 11:55 AM

bsprout said…
Evergreen, Julie Anne Genter has had much success questioning the justification for the RONs. For both the asset sales and the RONs the Greens have made progress by taking a rational economic stance and showing up National for not basing their policies on evidence. What is rattling the Government and their supporters are our solid economic arguments.

Also the Greens aren't against all roads just a lack of balance in the spending on roads compared to supporting other forms of transport. We don't want to promote a view that we are just anti-roads which is clearly an extreme view.

There is also a difference between managing a national campaign and dealing with regional issues. I have recieved much support as a Green activist in Southland by supporting our region's needs against the Governments biased agenda. As well as wanting a fairer distribution of funding for roading I have also campaigned for an improved rail service (there is no passenger train operating between Invercargill and Dunedin).

As the Greens become more prominent politically the level of attacks will also increase. I agree with you when you say that we have to stand firm but our stands should be rational ones.
January 4, 2013 at 12:21 PM