Who is Hekia's Secret Education Advisor? 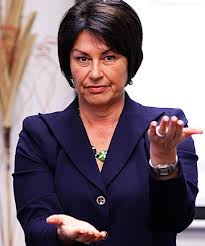 Official papers have revealed that the Government ignored both Treasury's and the Education Ministry's advice regarding the integration of a private school. Wanganui Collegiate provides for around 420 pupils in an attractive, but exclusive Christian environment. It required $3.8 million dollars to bail it out and bring it into the state sector and will cost around $3 million a year to keep it open. Both Treasury and the Ministry were concerned at both the cost of the bailout and the damage that will be done to the existing state schools where there are already 1400 empty places.

The Government, the Minister and the Ministry claim that their main education priority is lifting the achievement of Maori and Pasifika children and yet this government has pulled out all stops to support a small group of privileged children. The package works out at about $9,000 dollars per student and considerably more than the yet to be delivered extra assistance they promised for struggling children identified by the National Standards. I am sure that the Collegiate families will still be expected to pay substantial fees that will continue to maintain the school's exclusive status, but with the added bonus of state support.

Half of the National Party MPs send their children to private schools, including John Key himself, and it was no surprise when, in their first year in office, they increased private school funding by $35 million (even though only 4% of all students attend them). It was interesting that the Ministry of Education had its funding cut by $25 million shortly after.

We now have evidence that the Government ignores the advice of education academics, ignores the Principals Federation, ignores parents and school communities, ignores the Treasury and ignores the Ministry. So it begs the question, "whose advice do they listen to regarding education?"

I think Gerry Brownlee's response to Julie Anne Genter's attempt to produce evidence for his decisons regarding the RONS is telling. Brownlee produced no evidence, he just believed that they were a good idea.

The secret education advisor is probably no education oracle but Hekia Parata sitting alone in her office (she has difficulty keeping staff) and consulting deeply with herself. Her self-belief must be as compelling as John Banks' to be able to continue in her role when all evidence shows it isn't justified.   When education should be led in by someone with knowledge, empathy and compassion we have been  lumbered with a narcissistic autocrat instead.