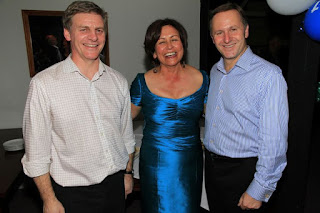 I tried to make sense of the detail in the Education Vote in the 2013 Budget and it was interesting to see where the biggest cuts were taken from and where the extra spending was going. The original document I used for these figures "Details of Annual and Permanent Appropriations" appears to no longer exist and my link goes to something entirely different.  I tried to copy it here but it was beyond my technical expertise. I did save it on my own computer in pdf form and can email to anyone who is interested.

The biggest winners, when you look at the extra spending above the previous year, were:

Obviously early childhood education came out well, but we must remember that in the National led Government's 2009 budget a huge $400 million was wiped from this sector and they are still playing catch up. The wasted money is obviously what is being spent on Charter Schools and when Peter Dunn can't see the purpose for them and is prepared to vote against the Government, it must ring warning bells. The School broadband initiative is great, but only if low decile schools can afford the hardware to use it. The extra funding on property must be over and above the $1.3 billion needed to fix the leaky schools.

Apart from the large primary and secondary sectors, most of the following budget lines started with very little and the cuts made will have a dramatic effect on provision and service:

-$57 million will be removed from the secondary sector and the correspondence schools, this is mainly salaries.
-$30 million is being cut from the primary sector and presumably much of it will be savings through the closing and merging of Christchurch schools.
-$3.4 million from industrial relations support and payroll
-$2 million from special needs residential support.
-$2 million cut from budget to support ECE providers in addressing low participation
-$1.8 million from supporting schools in being more responsive to their communities
-$1.47 million of further cuts from the advisory service
-$1.5 million from career advice, quality assurance and mobility support.
-$.9 million taken from the Fund for National Study Awards
-$.5 million from policy advice to the Government.
-$.5 million from Government coordination with sector groups
-$.4 million from supporting parents
-$.4 million taken from Mapihi Pounamu, supporting at risk students above year 9

The Government is investing heavily in their GERM priorities such as charter schools. They have put extra funding to areas that were seriously underfunded like Early Childhood and youth work training and support. However, it is obvious that they are not really committed to receiving policy advice, cooperating with the education sectors or the profession and they have cut funding to programmes that support struggling Maori and Pasifika students. The Government has even drastically cut the small amounts of funding that went to support struggling parents and providing broad curriculum advice for  teachers.

This budget will not strengthen our education system but hold ground in some areas and reduce capacity in most. It will further limit the amount of advice to the Government, limit collaboration and take resources away from our most vulnerable and high needs students. It favours private providers and weakens the ability to manage quality assurance.

This is the CTU analysis of the education vote:

$24 million operating funding is allocated over four years ($6 million per year on average). A cost adjustment to the non-salary component of ECE funding was “to offset some of the increased costs faced by ECE services”.

A portion of these allocations are specifically targeted to increase the participation among Māori, Pasifika, and children from poorer socio-economic communities in early childhood education.

A $15-million fund to support newly qualified teachers has been axed.

Both the Primary and Secondary Compulsory Education Budget-lines are down $58 million and $67 million respectively. These drops are likely to affect the Primary Sector more so than Secondary, as Government figures show the Primary roll is steady, while Secondary has decreased slightly (approximately 100 FTTE).
The Government has budgeted $19 million contingency funding for the establishment of the first Partnership Schools.

Vote Education has been through a line-by-line spending review. Although the actual effects of the cuts are opaque, there are significant reductions in curriculum support ($4.5 million); school transport ($8 million); National Study Awards ($4.7 million); Teacher Trainee scholarships ($5.8 million) and School Property Portfolio Management ($14.6 million).

There has been a partial discontinuation of Teach NZ scholarship scheme (apart from in hard-to-staff areas) a cut of $70.5 million over four years ($17.6 million per year on average). Much of the remainder will be diverted to Māori language teaching.

Unknown said…
Shared at http://sosnzexpress.wordpress.com/2013/05/17/education-vote-a-private-sector-win/ thank you for researching and sharing all of that. There's much to be done in NZ if we are to stem the tide of GERM.
May 17, 2013 at 4:02 PM

bsprout said…
I hope my figures are right, Dianne, because i found that the original pdf I used was removed and replaced with something quite different. I'm not sure if it was to manipulate the data or not, it's so hard to tell with this Government.
May 17, 2013 at 7:34 PM

Unknown said…
I agree. Data manipulation seems to be a speciality - National Standards data is almost up to Hans Christian Anderson levels of fiction...
May 17, 2013 at 7:45 PM