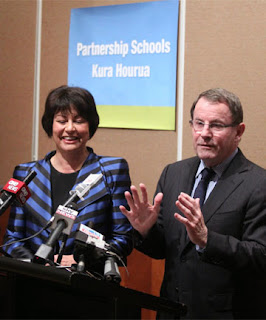 Hekia Parata is a Minister on a mission, by hook or by crook she is going to continue to shove unpalatable pills down the education throat. These pills are not liked by the profession or many communities, but they need to be taken for "the public good".

Little that Parata has tried to do to education has been successful: she has lost two court decisions regarding school closures, she had to backtrack on increasing class sizes, Novo pay is a continuing disaster and the PaCt tool will no longer be mandated. The Charter Schools are a last ditch hope to get a pill fully swallowed and digested despite the gagging and coughing from the education sector.

The Charter School introduction has been plagued by set backs. Lesley Longstone may have had useful knowledge about Charter Schools, but she struggled with everything else she was expected to do. Longstone's exit was costly. She earned around $1 million dollars for her 15 months on the job (initially a five year contract) when you include her salary and add on the $267,953 severance pay and $157,523 outstanding holiday pay she received on leaving.

John Banks was the Minister with the responsibility for Charter Schools but he had to resign his post while facing charges over electoral fraud. Act supporter Catherine Isaac was appointed to manage the Charter Schools introduction despite having a limited education background and she found the public meetings promoting the concept challenging.

New Zealand has been advised not to introduce Charter Schools by US education experts who had witnessed their failure. Isaac has claimed that they are introducing a successful model but it is difficult to find one as they appear to have failed in any country that has used them.

Of the 36 expressions of interest in starting a Charter (or Partnership) School only five were deemed viable and even then I have heard doubts about the expertise in some of them. $19 million of taxpayer money will be spent on these experimental schools (almost $4 million per school).

Minister Parata has decided to push on with investing in even more Charter Schools well before the value of the first ones have been analysed. As with most that National does, ideology always comes before evidence and reason.

Unknown said…
We would never let an unqualified person fix the wiring in our house but happily sit and let unqualified people educate our greatest investment. Interesting.
November 29, 2013 at 6:15 PM