Another Three Years Under The Blue Taleban... 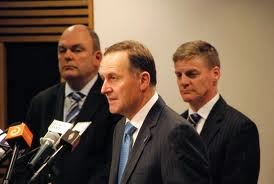 We have around another twelve months of a National led Government and there is always the possibility of them achieving another three years, possibly with the support of Colin Craig and the Conservative Party. For those who are concerned about social justice, a sustainable economy and a clean environment the thought of three more years under this regime is the stuff of nightmares. If we look at the trends up till now, what is currently being planned and the logical outcomes if National won another term, we could probably predict the following:


Enough of the Blue Taleban, the Green version would be so much better.