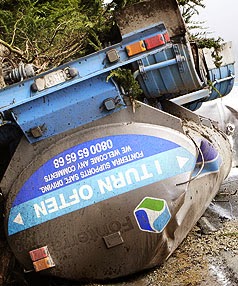 I struggle with the fact that our Southland roads are under-funded while the Government pursues its flawed Roads of National Significance programme. It also worries me that there is interest in developing new roads through national parks when we can't even maintain our existing ones. The following letter to the Southland Times supports a decent long-term transport strategy that seems only possible under a Green influenced Government:

We desperately need a national transport strategy that has a long-term vision and ensures any project using taxpayer money passes a thorough cost-benefit analysis. Sadly we have another Government, blinded by thinking big rather than thinking smart, that has committed the country to $12 billion worth of dubious motorway projects. Obviously nothing has been learned from the Solid Energy debacle (anyone want a briquetting plant?).


Dr Michael Pickford (previous Chief Economist, New Zealand Commerce Commission) has exposed the current flawed approach to building roads. Until the last few years the economic measure of efficiency in investment spending was the benefit-cost ratio (BCR) and this has been corrupted by including such things as ‘strategic fit’ that are not based on evidence and research, but on political whim.


This has lead to our Southland roads being deemed as less strategically important and ignores the fact our region earns over 12% of our nation’s export income. Despite dropping traffic volumes the Government has made Wellington’s Transmission Gully highway a priority and has entered into a dubious public private partnership (PPP) that will cost the country $125 million a year. Based on the Government’s own traffic projections, each car trip on this road will cost $15.


The Southland District Council, meanwhile, has had to consider converting sealed roads back to gravel and milk tankers struggle to negotiate our deteriorating infrastructure. Instead of doing the basics well, and ensuring value for our buck, we are being captured by dubious developers’ dreams (DDD).


As for the Haast to Hollyford road (another DDD), do all roads really need to lead to Milford? And when will we get a decent bridge south of Frankton?