The Greens, A Credible Alternative 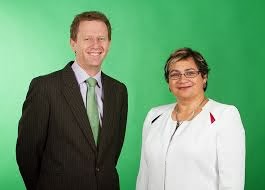 The National led Government has had a painful twelve months. The sale of state assets cost $250 million to implement (well over budget) and the money raised has been well below what was predicted. The citizens initiated referendum has been stubbornly ignored as Air New Zealand was dealt to in the manner of a weekend fire sale. Novopay and school closures have been managed particularly badly and the dairy shocks have shifted international attention to our poor environmental management. There are almost daily revelations of police behaving badly, and the Government's refusal to recognize their part in the Pike River tragedy is raising questions about their moral backbone. A whiff of corruption and self-serving behaviour refuses to go away while John Banks faces court action, the SkyCity deal progresses and it is revealed that it wasn't just Bill English who took advantage of loose rules to extract personal gain from the public purse.

The National led Government are desperately talking up the positive shifts in economic performance, but most people realize that it is largely on the back of the Christchurch reconstruction and it is mainly the already wealthy who are benefitting. Income inequality has continued to increase and poor housing and child poverty has been the subject of much talk but little substantive action. National's coalition partners are imploding and desperation has made the eccentric Colin Craig and his Conservative Party a  potential saviour.

The Green Party has taken full advantage of their fourteen MPs and extra staffing to be a strong presence in Parliament and have often been called the real opposition while Labour have struggled with an organisation review and changes in leadership. Time and time again they have challenged the Government using solid research and have exposed National's reluctance to follow good advice and use sound process.

In 2008 National and the Greens had a memorandum of understanding to progress a number of joint initiatives, including the highly successful home insulation scheme, and during the 2011 election campaign National regarded the Greens as a potential coalition partner that would be more stable and reliable than the fractious Act Party. However, since 2011 the possibility of any coalition has been established as extremely unlikely and National has changed tactics accordingly.

Every opportunity to attack the Greens is now used by National. Even straight questions from the Greens in the House result in replies where the Green's credibility is questioned. As much as possible the words 'crazy' and 'wacky' are used with the hope that the terms will eventually become synonymous with the Greens. National Party supporting blogs go even further, regularly likening the Greens to the Taleban or calling them communists. Russel is regularly attacked because of his hair colour and his Australian origins and Metiria has endured references to her use of makeup and clothing.

Despite the desperate politics to discredit the Green Party it has been difficult to get any of the mud to stick when there is the constant evidence of a party that is stable and well organised. The CIR campaign demonstrated the organisational strength of the party when it collected the majority of the signatures. Changes in leadership for the Greens do not have the same destabilising impact that it does on other parties that are so reliant on personality politics and now the Greens have a leadership team who have a combined 13 years experience in the role. Labour, as a party, has had experience in Government but its front bench is full of MPs who have only experienced being in opposition and its current leader is still establishing himself in the role.

Questions about the potential ability of Green MPs to manage ministerial roles in any future Government are easily parried when you consider their reputation for detail and hard work, many have business and management experience in the public and private sector before entering Parliament. Kevin Hague was the respected CEO of the West Coast DHB and David Clendon and Steffan Browning are successful businessmen. Even if some people struggle with aspects of Green policy, an insistence on good process and transparency will bring a welcome approach to decision making that doesn't exist currently.

Many right wing commentators have had to reconsider prejudices when they have directly engaged with Green MPs. An openly right wing Invercargill journalist reluctantly admitted a Green MP was "Rational, evenhanded, and with some good ideas (and he has had real jobs creating wealth in the real world)." Julie Anne Genter has been regularly winning bouts with Gerry Brownlee over his poorly researched motorway developments and Stephen Franks (ex Act MP and National Party candidate) has recently praised her presentation at a LEANZ meeting.

When the rest of the world, especially Europe, are recognizing that we must shift to more sustainable economic management and promote innovation and green business practices, then the Green Party is the logical party to lead that change in New Zealand. Gerry Brownlee's ridiculous insinuation that Green transport policies will lead to mountains of horse manure demonstrates real desperation when the Greens clearly beat National with their understanding of high tech industries and communication. The Greens do not support moving back to the industrial revolution, with a renewed focus on coal and other fossil fuels, but look instead at smart, future focused alternatives.

The National Party have had five years to prove themselves in managing our economy and our resources wisely and they have clearly failed at every level. The Greens, on the other hand, are increasingly proving themselves as a credible alternative.