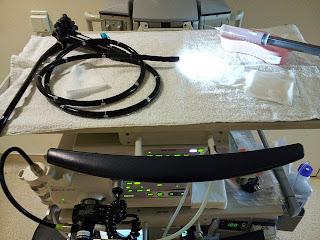 The front page article in the Southland Times today hit me at a personal level. Some years ago I became aware that I was passing blood and after a visit to my GP, was referred for an exploratory colonoscopy. As it turned out there was nothing seriously wrong with me but it was hugely reassuring that I could cross off bowel cancer (especially as I was in the danger zone of over 50).

The Southland region has the highest rate of bowel cancer in New Zealand, with New Zealand having one of the highest rates in the world. Despite these horrifying statistics a third of all GP referrals for colonoscopies in Southland have been recently rejected by the DHB.  At a public meeting a GP voiced his concern, "I send a patient, more than one, they are over 70, losing weight, blood in stool, and they still can't get a colonoscopy."

If I had had presented with my previous symptoms in today's environment it is unlikely that I would have been granted an exploratory procedure and would have had to go private to gain piece of mind. It must be hugely worrying for patients whose symptoms are concerning enough for their GP to request a colonoscopy, but then have the procedure refused. If a patient had limited financial means there would be no other way of getting support unless their health substantially deteriorated and by that stage the opportunity for early treatment would be lost. More than 100 New Zealanders die from bowel cancer every month and if detected early there is a 75% chance of successful treatment.

This Government is very skilled at manipulating data and love to talk up the fact that waiting times for medical procedures are dropping. What isn't widely understood is that huge numbers are removed from waiting lists for arbitrary reasons to create the impression of quicker turnover times. For colonoscopies in Southland, removing a third of referred patients from the list will not improve health outcomes but creates an impression of improved efficiency.

For a Government to knowingly manipulate data and deny New Zealanders timely treatment isn't acceptable from health or economic perspectives. It is far less expensive to treat the early stages of cancer than deal with a patient who has a terminal condition. Preventive health gives a far greater return on investment and cutting funding from this area of the health budget is short sighted and will have huge economic ramifications in the end.