Dairying, from Dirty to Dynamic 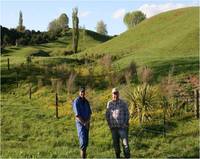 This isn't Russell's farm (it was too wet to get a photo) but come from a useful site:
The Global Dairy Agenda for Action
I had a very enjoyable and informative afternoon on Thursday. Russell McPherson, Southland's Federated Farmers Dairy Chairman, had invited me out to his dairy farm to have a chat and look over his property. As it turned out the weather wasn't too great so I viewed his farm through a window and we talked at length over a cup of tea.
Russell came across as the sort of farmer who is easy to admire, a hard worker who began his career as a shearer and worked his way into farm ownership. He is a man who would never be happy with the status quo but is always reflecting on the efficiency of his practice and looking for a new challenge. Russell's conversion from sheep to dairy was a business no brainer and his dairy shed reflected state of the art technology at the time of construction. I could tell by the appearance of his home and the visible surrounding environment that if anything was to be done on this farm it would have to be done well. He admired those who displayed the same work ethic as himself and was proactive in providing opportunities for others to begin careers in farming.
Despite his success and the fact he had much to be proud of (including his son who had initially invited me in when I arrived early and chatted to me until his father arrived) Russell was not a happy man. Growing concerns around the state of our rivers and lakes and the rapid increase in dairy farming had seen the public perception of the industry change from economic saviour to pariah industry. "Dirty Dairying" had become a catch phrase and it had become a career that Russell was reluctant to admit to in new social situations. As far as he was concerned he had nothing to be ashamed of and yet he was being tarred with the same brush as the few in the industry who did not operate to the same standards as himself. Russell was especially worried that if dairy farming had a bad reputation it would struggle to attract good people into industry and improving standards would become even more problematic.

Although we disagreed on a number of key issues, like bringing farming into the ETS and charging for water use, there were many potential solutions and strategies that we both agreed on. There is huge money to be made in the Dairy industry if people are prepared to work hard and I can imagine it will be providing a large hunk of our export income for some time yet. However, it is important that we get the right balance of regulation and compliance management to fully allow the environment to thrive and keep the industry viable. I don't think Russell and I will ever agree with what that balance would look like but I really appreciated the time I spent with him and look forward to more conversations in the future.

I would like to think that the Green Party will have a growing influence in parliament and conversations like this one must surely lead to ensuring that "dirty dairying" is changed to "dynamic dairying' and we end up with a country full of pristine rivers flowing through model farms.

AaronC said…
Beyond the environment, I wonder if Russell takes calves off their mothers and sends them to the works while he pedals the mothers milk?

I mean seriously do we have no issue with using animals like vending machines or ATM's? Why can Russel not explore crop based production instead? Theres no way we have exhausted research on the planets many sources of food and have concluded that exploiting cows is the best way forward.

There is a lot more wrong with dairy than just the pollution. I still object outright to this lifestyle choice. Saying its right is a step backwards, and helps the animals none.

bsprout said…
Aaron, outright eradication of an industry is hugely problematic and although you may hold strong views on the farming of animals it would need a massive societal shift before something like that could be even contemplated. I do hold the belief that monoculture farming is a concern and working towards biodiversity would be an obtainable goal in the future.
November 19, 2011 at 6:48 PM

robertguyton said…
bsprout - you've spent plenty of time in our pristine, natural environment; forests and mountains. How does that compare, in terms of biodiversity, with Russel's farm?
November 19, 2011 at 7:16 PM

bsprout said…
A magic wand is what is needed to suddenly turn all our farms into permaculture food forests, Robert, and that would be truly wonderful. Until that occurs we have to work on the dairy farmers to willingly embrace the concept. :-)
November 19, 2011 at 9:05 PM