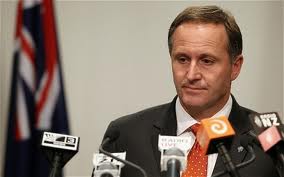 Gareth Hughes' revelation that there have been 11 shipping near misses around our coast since the Rena grounding is a real concern. Not only have lessons not been learned from the earlier wreck but we are again relying on luck than good management.

This is a government whose leadership is essentially lazy and hard work and due diligence are avoided if at all possible. There are risks to this approach and to maintain the appearance of governing any revelations that they haven't done their homework have to be managed quickly, alibis constructed and potential disasters averted.

I have now come to realize that our Prime Minister's gambling background truly does dictate his approach to governance. As he ignores most of his advisors and refuses to read any reports that may conflict with his "Planet Key" view of the world he must have some way of navigating through the political quagmire. I believe that he has a team of actuaries in his office and he refuses to actually do anything or spend money until a high level of risk is determined.

The classic situation was the class size debacle when it became increasingly clear that none of the homework had been completed and the blank page in the homework book was about to be revealed. The decision was immediately reversed before the enormity of their negligence was exposed.

Key's actuaries have generally been fairly reliable but their prediction that there was little risk of the public finding out about the Kim Dotcom spying has been proved wrong and Key's spur of the moment excuses are proving suspect. However, it is tricky to accuse the Prime Minister of lying if he claims the dog ate his homework (no matter how implausible that may be) and, unless there is proof otherwise, his word has to be accepted. One also wonders how the loyalty of those beneath him will last when he continues to blame them for his own negligence. I can imagine some damning leaks appearing when the heat really comes on and the buck regularly gets shifted down.

Key is beginning to find out that the longer he continues with his risk analysis, hands off approach that the odds of being caught out actually increases. It is a little like our coastal shipping, if the odds were originally 100 to 1 for another shipwreck to occur and we've already had 11 near misses...?

survivor said…
I am itching to straighten your background image, it's on a tilt. You can fix this in any photo editor.
October 11, 2012 at 6:36 AM

survivor said…
Send me the original if you want me to fix it, won't take a minute. james.redwood@slingshot.co.nz
October 11, 2012 at 5:04 PM