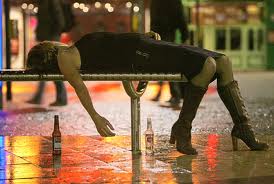 Alcohol has always been a problem in New Zealand since the first Europeans arrived on its shores. Lawlessness and bad behavior in the early years of European settlement, often fueled by alcohol, was partially responsible for the development of Treaty of Waitangi. The only way for Britain to have legal jurisdiction over New Zealand, and so be able to enforce the peace, was to gain British sovereignty over the nation. It appears that even in those early days the main approach to dealing with excessive alcohol consumption was policing the effects rather than controlling the sales and supply.

Those who have suffered most from the effects of alcohol have been families and children. The temperance movement early last century attempted to ban alcohol altogether and did succeeded to bring about prohibition in different parts of the country(they needed a 3/5 majority vote). However the liquor industry has always been very profitable and there was a strong reaction to the growing strength of the temperance movement from the industry and New Zealand History Online describes the time well:

The trade fights back

Pro-continuance poster
Publicans, brewers, and spirit merchants were naturally horrified, and moved swiftly to protect their trade. They had a lot to lose if local prohibition spread. The liquor trade organised itself into the National Council of New Zealand. With the backing of many wealthy and prominent businesses, this organisation was generally better-resourced than the New Zealand Alliance.
The National Council spent lavishly on advertising, and used cartoons to portray temperance advocates as joyless puritans – 'wowsers' – who wished to choke all the pleasure out of life and trample on others' liberties. ‘Moderate’ leagues sprang up in many electorates, arguing that people in a free society should be able to choose to drink or not drink.
The liquor trade's lawyers also kept a close eye on the polls, and delivered long lists of electoral ‘irregularities' to the courts whenever no-license was voted in.
In many ways we are seeing a parallel in what is happening at present. There is a growing concern about the effects of alcohol in our communities and damning facts and statistics are readily available:
Prof. Doug Sellman has been a particularly strong voice regarding the impacts of alcohol and he has advocated for changes to be made to reduce consumption. As happened 100 years ago he has been subjected to some strong attacks from the the industry and accusations of being a wowser, trying to impinge on individual rights and promoting the nanny state. While Prof. Sellman has always claimed the facts and science should dominate the debate the attacks he has been subjected to have been largely ideological and emotive.

The Law Commission took a very considered approach to manage the problems of alcohol and their 2010 recommendations largely supported Prof. Sellman's views:
It is interesting that the final bill has largely watered down the recommendations to almost a fraction of what would be necessary to make a real difference, disregarding the fact there is strong community support for tougher alcohol laws:
Labour, the Greens and the Maori Party have worthwhile Supplementary Order Papers (SOPs) to address the inadequacies of the bill and bring back the intent of the Law Commission's recommendations. However, despite the efforts of the opposition I see little changing the obvious influence of business interests over this National led Government. It appears that the industry will have its way again as it did 80-100 years ago.