The Greens Go Well in Gore. 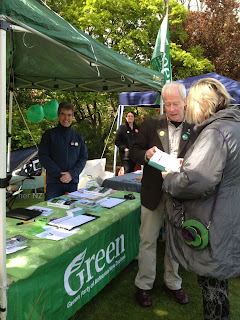 Gore is in the heart of Bill English country, he has his busiest electoral office there and it is not far from his controversial Dipton home. It is a wealthy agricultural centre and is known for it's excellent, higher end shopping and the annual Gold Guitars Awards (it is the New Zealand equivalent of Nashville and Tamworth for country music). It is less well known for its Rhododenron Festival and its support for the Green Party.

I spent a busy Sunday at the bustling Rhododendron festival manning a Green stall with MP Steffan Browning, talking politics and collecting CIR (citizens initiated referendum) asset sales petition signatures. It was the first time I had set up a Green stall in Gore and I was interested to know how we would be received. I was pleasantly surprised. Steffan was a great front person, he has a an easy, jocular manner and his agricultural background allowed him to speak knowledgeably about farming issues to the locals.

It wasn't hard to get people to sign the petition, the asset sales are not popular even in Gore. One very staunch National supporter wanted desperately to sign the petition but found it too difficult to do so at a Green or Labour stall, his relief was almost palpable when we suggested he could sign it at the Grey Power stall further along.

The Labour Party had set up a stall beside ours and people seemed to think it was perfectly reasonable that the two parties would be cooperating. Roll on 2014 and a Green/Labour Government. 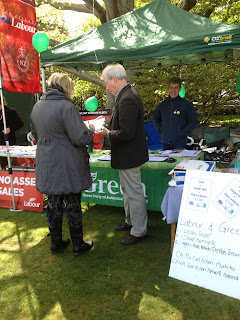 Jeff Manning said…
Administrators are needed in every educational institution, be it a school or a child day care center. The duty of the educational administrator is to supervise the everyday activities of the school. They are responsible for the smooth functioning of the school and have to chalk out the curriculum, make budgets and monitor the working of the teachers and other staff members. It is a full-time job and the qualification required to become an educational administrator is a Master's Degree or a PhD. The distribution technique of the resume boomer is regulated by a team of dedicated analyzers who are trained to shuffle through your resumes and then post them to the best people they think would like to hire you this increases your odds to get a job and get it quickly without wearing out the soles of your shoes. Denver is the largest city and also the capital of the state. As a result, it is no surprise that the main HR jobs are concentrated in this area. If you have some experience in the field of HR then you can work as an HR generalist in many of the companies in Denver. 4.Establish relationships with suppliers. A Neonatal Nurse Salary Can Increase Significantly Over Time
November 13, 2012 at 12:43 PM