Data Culture and the Forgotten Kids. 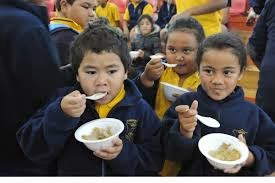 I was working with a school principal this morning to organise our local function for newly registered teachers. After the organisational stuff was dealt with we discussed the worrying trends occurring in education and the effect it is having on our children.

This Government came into power with one very clear goal - raise the achievement of the educational tail. They identified a group comprising 20% (debated) of all children who were failing to meet minimal levels of achievement and they determined that a high percentage of these children were Maori or Pasifika.

Their method was clear, they would introduce an assessment system across all children (including the 80% of children who were succeeding) and the resulting data would better identify struggling children and enable them to target resourcing to where it was most needed. This was the vision.

Our whole education system has been shaped into one huge data collection machine. All teaching and testing has shifted from the needs of children to the demands of data creation. National Standards dominates professional development, and the literacy and numeracy focus has narrowed teaching and learning and constant testing is the reality in most schools. The most important thing teachers must now concentrate on is the accuracy of their data.

It is extremely difficult to get meaningful data consistent within schools and across the country. Around $60 million dollars has been spent trying to make National Standards operate consistently and most of the Ministry's professional development budget has been focussed on this endeavour. The first published National Standards data was even described as 'ropey' by the Prime Minister but they did reveal something that teachers and educational academics already knew, the higher the decile of the school (or the greater the wealth of the community) the higher the levels of achievement.

After five years of this Government and four years implementing National Standards, one would think that if lifting the achievement of our struggling learners and the Maori and Pasifika children (we had already identified through earlier assessments) was the priority, then we would see some targeting of resources and an improvement in results.

The reality is (as John Key and Steven Joyce like to say) that there has been minimal progress with lifting our struggling learners. The Government's claim of shifting resources to those who need it most has not occurred. In talking to principals I hear that the support they used to have from Special Education Services (SES) for their highest needs children has actually been significantly reduced and the criteria to get that support has had the bar raised. The next line of support are our Resource Teachers of Learning and Behaviour (RTLBs) and they have had their workload significantly increased, and are therefore stretched to meet the demand.

SES suffered from the $25 million Ministry of Education Budget cut and have struggled to provide the same level of frontline services that the Government had actually claimed would improve after the cuts. RTLBs have taken on much of the higher needs support once managed by SES and have less time to spend with those with moderate needs. Lower decile schools (that have a larger proportion of struggling learners) find it difficult to access special education funding because of the costs involved in getting the required assessments.

Sadly the new, targeted funding has never really eventuated and much of the new money has not gone to the lower decile schools as one would have expected but to the private schools that serve 4% of the school population and cater for our most affluent families. These schools capture most of the special needs funding and extra spending. $35 million extra money was given to private schools at the time the Ministry had its funding cut and Wanganui Collegiate (an elite private school) was bailed out of its financial difficulties by $3.9 million while special needs schools were being closed. The $27 million recently set aside for struggling learners in our public system is actually chicken feed when you consider the numbers of children we are dealing with and the prior cuts in funding that it partly addresses.

Our children have had their teaching and learning shaped to support the National Standards data collection machine and the Ministry is setting up systems and repositories to collect and store all of the data. I am sure many people will be employed to analyse the data and produce graphs and tables that will only reconfirm that the same children are failing and that achievement is heavily influenced by socio-economic backgrounds. By working really hard these graphs and tables will become more and more accurate and we will be able to present the same information with even greater certainty.

In five years the children this Government claimed were their priority have been well tested, some may have breakfast provided, and the really lucky ones may get a few hours extra support from an unqualified, low waged teacher aid (or no wage, depending on Novopay). Most will go home to families still struggling on minimal and declining incomes and over-crowded, poorly insulated houses.

This Government promised much and has delivered little to our public education system, their real priority has always been to ensure that private schools (where their own children go) are well looked after.