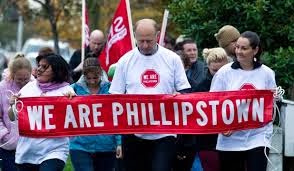 A High Court Judge decided today that the process used to close down a Christchurch school was illegal.  It was obvious from the very beginning of the process to close and merge Christchurch schools that the Minister had an idealogical agenda and did not want a high level of community or school involvement. An Ombudsman had been so concerned by the shoddy process that he did his own investigation and the Chief Ombudsman, Beverly Wakem, is currently carrying out a more comprehensive inquiry.

Christchurch schools had become battle weary, not only were they trying to hold things together and maintain a stable environment for children and families after the earthquake, but they had endured the forced implementation of National Standards and the Novopay debacle. It was difficult for them to find the extra energy to engage in the truncated consultation and submission process that the Minister forced upon them.

One school did somehow find the energy to fight back. Tony Simpson, Principal of Phillipstown School, was so appalled at the deliberate manipulation of facts and blatant dishonesty in the process that he refused to roll over as many others had done. In one meeting with him he patiently explained to me how the Ministry (on the Minister's behalf) had attempted to use a number of bizarre, and plainly false, justifications to merge them with Woolston School:

Tony's experience of the submission process echoed what the ombudsman had found, the school was provided with little information that they could respond to. It appeared that a decision had been made purely on the economic benefits of combining two schools on one site. The interests of the children and the community were seemingly not regarded as being important.

Despite what the Minister has claimed, the Government has shown little interest in supporting low decile schools or those that cater for high needs students. Salisbury School also received a legal judgement in their favour when the Minister tried to close them down. The judge in this case determined that Parata had not given enough consideration to the health and safety of the high needs girls who attended the school.

When you contrast the treatment of Phillipstown and Salisbury schools with that of what Wanganui Collegiate received it is clear that already privileged students are favoured over those at the other end of the social and economic spectrum.

The Phillipstown School community has suffered unnecessarily under a callous Minister and Ministry and despite winning this particular battle they may still have to endure another period of consultation and future closure anyway. If this does occur it will show just how disconnected this Government is from the lives of ordinary families and communities.

PM of NZ said…
It is the government's perogative to govern as they see fit without locals digging in for a fight. We are in a representative democracy and public servants such as this stirrer of a Principal can lump it or like it. As for activist judiciary, that's another topic.

Never was any opposition a few years ago by lefties to Trev closing all those schools under Labour's watch.

Just let this government get on with its mandated job of reducing my taxes and weeding out the unioinised.
October 11, 2013 at 11:30 AM

bsprout said…
PM, what a bleak view you have of how a democracy should function and what little knowledge you have regarding the Invercargill situation.

You obviously do not hold with Lincoln's description of a democracy as "Government of the people, by the people, for the people..." Why a party that won 47% of the vote should be allowed to become a dictatorship after an election is beyond me. Surely communities should be part of the decision making process regarding the provision of education?

There was opposition to Mallard's schooling review in Invercargill and I was one of those involved in fighting it. Rod Donald also came down and provided support. Sadly the end result came out of destructive infighting between communities and schools and Trevor just signed off on what was presented to him. It became a battle between the secondary schools and primary schools and we largely did it to ourselves in the end.
October 11, 2013 at 11:58 AM

The people elected a government in 2011, maybe not to the liking of some losers. Now get over it and let them get on with governing.

I'm sure one day the entitled of your ilk will unfortunately get another turn at the Treasury helm to impose further usurious taxes and wreck the economy whilst doing God's work questing for their socialist nirvana.
October 11, 2013 at 12:58 PM

bsprout said…
PM, even if National had won more than 47% of the vote it wouldn't have provided them with divine abilities to always make the right decisions. Elected governments should always seek expert advice and have good processes around decision making. I am sure you would welcome having more input under a Green Government.

I was interested to note on your own blog that you have a very extreme and narrow view of who should be in Governance roles. You do not support diversity and broad representation but think that only conservative men should be our decision makers and once in power shouldn't be questioned.

You obviously haven't read the evidence that shows that the greater diversity and gender balance that exists in management structures, the more likely the business will be resilient and successful. The firms that survived the economic recession were more likely to have female directors. http://www.nbr.co.nz/article/bold-approach-suggested-women-directors-gb-126062

Also green businesses are also amongst our best performers: http://www.nzherald.co.nz/business/news/article.cfm?c_id=3&objectid=10816101

The way you describe people who have a different view from yourself and your inability to engage in constructive discussions reveals much.
October 11, 2013 at 1:36 PM

PM of NZ said…
"people who have a different view ... inability to engage"

A conservative view is the only way to get on in this world. A few politicians with real gumption could do a lot to wean this world of the do-gooder know-it-all entitled that seem to abound on the left. Unfortunately the Nats are a total failure having squandered their mandate on that front.

As for engagement, I've got better things to do than argue with the ideologically blind.
October 11, 2013 at 3:39 PM

bsprout said…
"As for engagement, I've got better things to do than argue with the ideologically blind."

robertguyton said…
PMofNZ says:
"The people elected a government in 2011, maybe not to the liking of some losers. Now get over it and let them get on with governing."

His underlying message is, if you lose the vote, you lose the opportunity to speak. Not so, PM, you silly goose. All members of a democratic society are welcomed to say what they think about whatever the Government might do, or try to do. Your Fascist declarations sound ridiculous to fair-minded folk like us. "Shut up, you losers"!
I don't think so!
October 11, 2013 at 8:01 PM