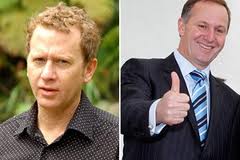 It is interesting to observe different leadership styles when those in positions of responsibility have to stand up and be accountable. When we compare the way Russel Norman managed the discovery that a Green Party member (and partner of his EA) was responsible for the defacing of National's Billboards with how John Key managed his error regarding his Standard and Poors comment, we see vast differences in approach.

Russel Norman responded almost immediately to the information he received regarding the billboard actions by making a statement to the media. He made an unequivocal apology to the National Party and he  had made immediate contact with John Key to apologise in person. Russel also identified those involved even though his EA was married to the instigator. Although the Green Party had not condoned nor instigated the action, Russel offered Green Party assistance to rectify the problem. Transparency and honesty are important elements in how we Greens operate and when individual members fall short of these traits it is taken very seriously and we are expected to take full responsibility for our mistakes.

When John Key found he was in contradiction with Standard and Poors over a statement he made in the house he managed the situation in a very different way. I will let you be the judge of what kind of leadership you are most comfortable with, but in my case my preference is clear. All people make mistakes but honesty and transparency goes a long way.